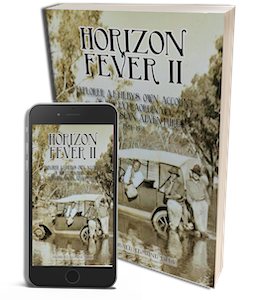 Explorer A E Filby’s own account of his extraordinary Australasian adventures, 1921 – 1931

Before A.E. Filby even embarked on his famous African expeditions, he took advantage of a government-sponsored scheme to migrate to Australia. It was 1921 and his daredevil nature soon had him performing reckless feats as a buckjumper in a popular circus rodeo. Whilst trekking through this vast continent he embraced the opportunity to become a jockey, photographer, actor, hotel representative, pilot, car-salesman and pearl diver.

But Australia was just a stepping stone for Archie to explore many other colourful far-eastern countries including India, Singapore, Borneo, Java and China.

Horizon Fever II covers explorer A.E.Filby’s early years, having been discharged from the army after four years of service during World War One.