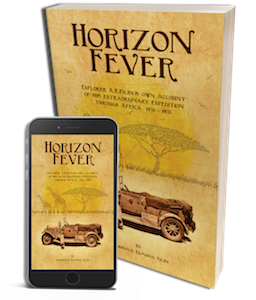 Explorer A E Filby’s own account of his extraordinary expedition through Africa, 1931 – 1935

Not only was A E Filby a famous British explorer, but he was also my Uncle Archie. He died before I was born, but his unpublished manuscript, ‘Horizon Fever’, and many scrapbooks, survived. Proclaimed “the World’s most travelled motorist”, A E Filby undertook some breathtaking expeditions, including his 37,000 mile journey from London to Cape Town and back in a series of dilapidated motorcars.

‘Horizon Fever’ is an honest, colourful, often shocking account; a snapshot of bygone days and attitudes. It tells of missionaries, pygmies, big-game hunting, gold-mining, crossing the Sahara and swimming in the Nile with crocodiles.

One of Archie’s companions was a monkey called Congo. Another was a dog that adopted him, until it was killed and dragged up a tree by a leopard. Archie himself comes across as a courageous, feisty, quick-tempered, bossy little man, but full of fun, generous and never one to bear a grudge.

Thanks to Archie’s records and photographs, we have a unique glimpse of an astonishing feat of endurance, 80 years after it was completed.