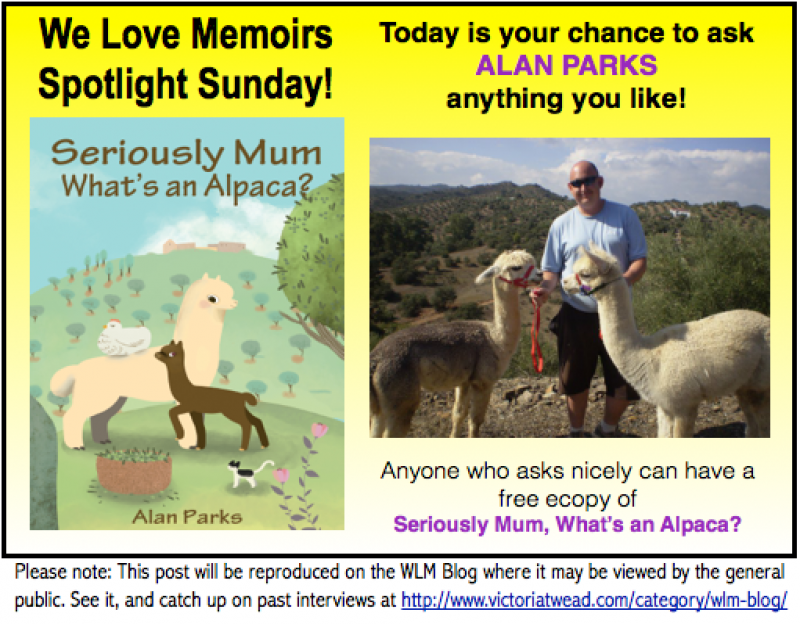 Alan Parks:  Cherry, no I don’t think I would. The book was never pat of the plan. And certainly not two books! So many crazy things happened to us, and people said “You could write a book” I thought why not. I never really expected people to want to read it. It has been quite amazing to find people making friends on FB or emailing me to say they have read the book and really enjoyed it. Thats very surreal!

–Sharon, three out of our six winters, we have been told it has been unusually wet!!!

–Louise, I can send you the first one if you don’t have it? Do you have a kindle

Sharon Carter Figueiredo:  Oh Oh, I was hoping for a bit less rain next winter. You still have not said what you do with the Alpaca fleece?

Alan Parks:  Janet, that is what we would try to do. Also, coming from Brighton, Lorna really misses the sea, so it would be nice to be within striking distance of a nice beach!

Janet Hughes:  Yes I moved all the way here, to live on a street called Miramar, or Seaview

Alan Parks: Oops, missed that Sharon. Not much to be honest. Since the book came out I have been able to sell some to spinners and crafters down on the coast. We only have eight, so it doesnt make it viable to post it anywhere to be processed. So if anyone knows anyone in Andalucia, looking for unprocessed alpaca fleece, speak now, or forever hold your peace!!

Sharon Carter Figueiredo:  Thanks Alan Parks it would be good if you could sell it to someone or they could use it somehow. My daughter in Oz spins and then weaves some fleece.

Louise Fenton:  Yes Alan I have a kindle!