We don’t seem to have had a regular winter here in Spain this year. February is usually the coldest, wettest month of the year, but this February has been glorious. It’s been wall-to-wall blue skies and sunshine, very little rain, and not a single snow-flake. (I’m not complaining, although Paco next door shakes his head and says it’s not good for the olive and grape harvest this year.) The lack of rain probably explains this unusual event…

“Another day in paradise,” I thought as I climbed the staircase to our roof terrace. I set down the heavy laundry basket, heaped with wet bed linen. Perfect drying weather: very windy, but not a cloud in sight, and the sun beating down. The washing would flap itself dry in no time.

I leaned on the terrace wall and looked around. Joe and I never tire of the view over the village and around the mountains. A few curls of smoke, rising from the only occupied houses in the village, were swiped away by the wind. Clusters of almond trees, dressed in white blossom, decorated the mountain slopes, the wind ripping at their petals. The green mountain tops gave way to endless blue sky.

I turned my head, and froze. To the west, on a nearby mountainside, I could see black smoke, a lot of it. I squinted. Not just smoke, but flames reared up as I watched, spreading in a line as wide as a football pitch. A wildfire, and it was moving fast, whipped up by the high winds. 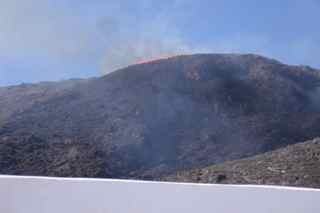 “Joe! Joe!” I yelled. “I think there’s a wildfire on the mountain. Quick! Bring the binoculars!”

In the short time it took Joe to join me upstairs, the fire had doubled. Trees and bushes burst into flame as the fire galloped up the mountain, devouring the dry vegetation, fanned by the wind.

“I’m going to get Paco,” I said and clattered back down the staircase at high speed. I knew Paco would be next door as he always took his annual leave during February, spending it shooting quail and carousing with his friends. I shot out into the street, and, calling him, burst through the open front door. Paco was alone in the little kitchen, skinning a rabbit for the pot on the fire.

“¡Fuego! Fuego arriba!” I explained breathlessly. I waved my arms and pointed. I knew that Paco would alert the Fire Brigade, and he would describe it much more clearly than I could in my stumbling Spanish.

Paco wiped his hands on Carmen-Bethina’s best tea cloth and followed me into the street. I pointed up the mountain, and he stared, shading his eyes with his hand from the glare.

“I’ll call the Fire Brigade,” he said, and disappeared back inside his house.

Joe and I watched from our roof terrace. The fire had crested the hill, travelling away from our village but heading toward the next, out of sight over the mountain. Clumps of bushes on our side of the mountain were still alight, but the heart of the wildfire, judging by the black smoke, was growing on the other side. El Hoyo was in no danger, unless the wind changed direction, but the next village was.

Helicopters arrived with giant bags of water. They buzzed overhead, hovered, and spilled their loads to douse the flames. Then figures appeared on the hill, and the last stray patches of flame were beaten into submission.

That evening, when the sun went down, Joe stoked the wood-burner in our kitchen.

I climbed the staircase yet again. Although the mountainside was black, dotted with smoking tree skeletons, the fire was out. It was then that I discovered that the washing was not dry at all. In all the excitement of the fire, I had forgotten to peg it out.

But that’s the good thing about living in Spain, tomorrow invariably brings another sunny day…