After 10 years in our Spanish mountain village, we know what to expect in summer. The village fills up with people we haven’t seen for a year as families arrive to escape the heat of the cities. Children, a foot taller than last year,  run wild in the streets and the jasmine-scented air is heavy with the sound of our neighbours’ guitar music.

In summer, the swallows wheel high overhead, snatching insects on the wing. House martins return to claim and refurbish the nests under the eaves that they use every year.

This year has been slightly different, and we don’t know why. The swallows arrived, but there were far fewer than previous years, and our house martin pair never showed up at all. There seem to have been less flies around this year, perhaps that’s why the swallows didn’t come? However, we’ve seen other creatures that we don’t normally encounter, like the time I was watering the flowers.

I pointed and we watched a beautiful snake slide soundlessly out of the flowers, down the steps and under the garden gate to freedom. It clearly didn’t enjoy the shower from my watering can. We weren’t afraid; there are no harmful snakes in Spain, apart from the viper, which is so shy you’ll never see one.

We’ve seen wild mountain goats, or ibex, a couple of times in the past, but this summer we’ve seen them two or three times a week. The first time, I grabbed my camera.

“Stop the car!” I squeaked, pointing.

The goats stared at us briefly, then cantered away, melting into the scrubland before I had time to point the camera.

The second time, I was prepared. These ibex were close, seven of them, right by the side of the road. But in my excitement I couldn’t manage a single good photo. With no difficulty the herd scrambled up the mountainside until all we could see were their horns, silhouetted against the blue sky. (You’ll need to stare at the left side of this picture to make out the horns.) 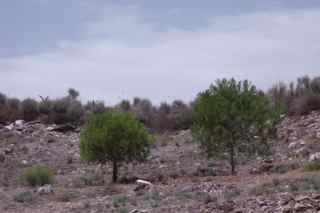 The next time we saw wild goats they were grazing in olive trees that they’d climbed. There is something extraordinary about seeing goats up trees, but they jumped down before I could get a decent picture.

No, I didn’t manage any good wildlife pictures this year. No pictures of baby house martins, their beaks agape, begging insects from their industrious parents. No silver snake in the garden. No shots of the iconic ibex on the dry, craggy mountainsides.

But there was one little creature I managed to snap, not outside, but in our living room. We have no idea where it came from but we guess it might have fallen down our chimney.

A tiny bat that squeaked crossly as Joe gently coaxed it onto the dustpan before setting it free outside. It stayed obligingly still while I clicked the shutter, but I still didn’t manage to take a good photo.

I guess I’d better stick to writing and leave the wildlife photography to the experts.