I like the colour red. I thought about the significance of that colour as I gave my latest book, ‘Two Old Fools on a Camel’, which describes our year in the Bahrain, a final check before publishing. We’ve enjoyed eight Christmases in El Hoyo, our village in the Spanish mountains, and one in the Middle East.

Of course they differ hugely, but the colour red is significant in both. 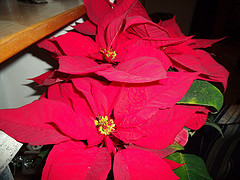 In Spain, Christmas starts at the beginning of December when Carmen, our next door neighbour, presents us with a poinsettia. My heart always sinks, as the blood-red plant is doomed to die a slow death in my hands. Within days its crimson leaves curl and turn brown. By Christmas, only a naked brown stalk remains, every leaf having relinquished its hold and dropped with a dry rustle to the floor. 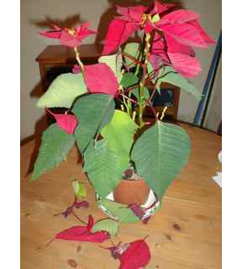 But that’s beside the point. Even though Christmas here in Spain is a far more low-key affair than in the UK, stores are packed with Christmas merchandise. Roadsides and roundabouts are planted out with scarlet poinsettias, which survive much better than mine at home. Gifts are exchanged, althought not until January, but families get together on Christmas Eve to eat and drink. Our next door neighbours toast almonds on their open fire, and their house is buzzing with laughter and chatter. The table is spread with a red cloth and the family eat the delicious Christmas feast prepared by Carmen and the ladies of the family, washed down with Paco’s homemade ruby-red wine.

Our expectations of a merry Christmas in Bahrain were low, but we were pleasantly surprised. Bahrain has a huge expat community and some stores set up a limited Christmas display of Christmas goodies. It was strange to see Muslim ladies in their burkhas and all-covering black abayas browsing the Christmas aisle, stopping to stare at the red and gold tinsel and tins of biscuits depicting scenes of the Nativity, tied with red ribbon.

Being a Muslim country, alcohol is not on general sale, but Joe and I had a stroke of luck just before Christmas. We discovered a place that sold vast quantities of the stuff from a windowless building guarded by armed security men. We could buy beer, wine and spirits, whatever we liked, and take our booty home. But our purchases were not wrapped in red Christmas paper, or red Christmassy carriers, they were shoved into black bags to disguise them, as it’s not permitted to have alcohol on show in Bahrain.

Alternatively, we could celebrate Christmas at Bennigan’s, our favourite haunt and oasis in the Bahraini desert. Here, the Filipino bar-staff were dressed in microscopic red Santa costumes, much to Joe’s delight. But we missed the general Christmas atmosphere and decorations, where Christmas carols are playing in stores and people are busily preparing for the festive season. That December we saw no decorations, apart from the red flag of Bahrain, patriotically fluttering from buildings and cars. These were the first sinister signs of the Arab revolution that was creeping towards this tiny island in the Persian Gulf.

While we were there, the Arab Spring erupted, and Bahrain was left with red blood on its hands. ‘Bahrain Days’ were held, where we were all encouraged to wear red to declare our allegiance to Bahrain and the King, and the red flags multiplied. After a year spent teaching as the revolution raged around us, we were delighted to return to the peace of our Spanish village.

Back in El Hoyo, a year later, we can again enjoy Christmas shopping in the nearest big town, and share a Christmas tipple with family and neighbours. Carmen’s once red poinsettia may be wilting, but I look at the bag of red tomatoes Paco has just given us, and the bottles of homemade red wine he thrust into our hands, and I’m grateful. The colour red is a festive splash here, not a flag, and not a political statement.