Here in El Hoyo summer is dying, as are the leaves on our vine.  Our garden needs tidying constantly and we always seem to have rubbish to throw away. Rubbish, garbage, trash, whatever you call it, it all needs disposing of… 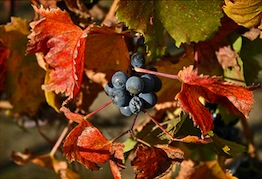 Since we moved to our Spanish mountain village, we’ve discovered that the Spanish are incredibly resourceful and find ingenious ways to use items that Brits happily throw away. The previous owner of our house used an old upside-down frying-pan to cap one of the chimneys to stop the rain coming in and sparks flying out. Itʼs a little quirky but works perfectly well. So we’ve kept it, giving it a new coat of black paint every now and then.

Walking in the countryside, one soon encounters gates barring entry to private property. Closer inspection often reveals that many of these gates are home-made and can be quite elaborate. One such exists close to our village, halfway up the mountain. The owner has fixed two metal bed frames, with springs and all, to posts. The frames meet in the middle and are padlocked together making a very serviceable portal. Topped with an old bed-head and a weather vane, it’s almost a work of art.

Our part of Spain hasn’t really embraced the re-cycling ethic yet, with no bins of different colour for different types of waste. All rubbish, whether it be glass, paper or general waste, is hurled into the same bin, unsorted. People often leave the lid open, and village cats dive in to search for scraps. As the sun beats down, unpleasant odours of rotting food waft out. Then, at six oʼclock every morning, the refuse collection men arrive to take it all away.

When we first came to the village, communal bins were conveniently placed at most street corners. But times have changed, and since the economic crisis, cutbacks have been made.

“Itʼs gone,” said Joe one day, coming back into the house still carrying a bag of trash.

“The garbage bin. The one next to the cemetery.”

We traipsed round the streets looking for a skip and finally located one near the square. For the next few weeks, throwing rubbish away was a game of hide-and-seek as the bins never remained in the same place twice. Good exercise, but slightly annoying, and Joe moaned about it constantly.

Then, one day, a big, shiny new bin appeared in its original place beside the cemetery. It gleamed with newness, and around the base was a metal bar. For a while Joe wrestled to open the lid, sweating and cursing, then discovered that if he stood on the bar, the lid magically opened. His good temper was restored. No doubt the village cats were upset because no longer could they sneak in and ferret around for the wonderful delicacies a communal garbage bin has to offer.

But Joe was happy, until a rather unfortunate incident occurred. He stepped on the bar, watched the lid rise, then absent-mindedly threw the car keys into the dumpster instead of the bag of rubbish he was holding in his other hand. Joe stared into the depths of the vast bin in disbelief before turning the air blue with Anglo-Saxon profanities.

There isnʼt space here to describe what happened next, but Iʼm happy to say that the sorry tale has provided good material for my next book…