Hurrah! All the decorating is finished, inside and out. We’ve splashed white paint into every nook and cranny and everything looks fresh and clean. Joe’s bad back is better, although he still complains about his scraped knees (from kneeling on the roof), his bruised thumb (trapped under a plank of wood) and gashed finger (changing a light bulb). 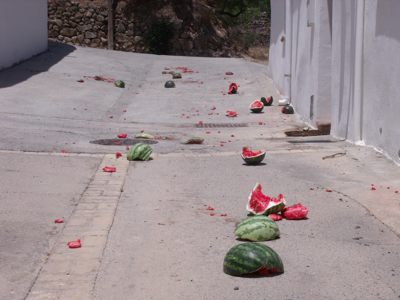 Yes, everything looked wonderful, ready for the summer, except for the chicken house. The chicken house was badly in need of sprucing up and we still had an unopened tub of paint. Joe pulled the lid off, and we stared at it.

So he stirred energetically, but the more he stirred, the pinker the paint turned.

“It’s most definitely pink,” I said, rather unnecessarily.

“Well, I’ve had enough. I’m not going down the mountain to buy more paint,” said Joe. “The chickens will just have to have a pink house.”

I opened my mouth to argue, but something unexpected stopped me in my tracks. A little tractor was passing our house, going uphill, heading for the farmland above. That wasn’t unusual, but the next event was. CRASH! Startled, our chickens shrilled their alarm call, while Joe and I froze, listening. We heard a series of loud thuds, and rolling sounds, followed by the tractor braking, and a torrent of Spanish curses from the farmer. Then the tractor started up again, the farmer’s curses fading as he continued up the mountain. Joe and I opened our back gate to look outside.

It was a scene of carnage. Red juice splatted the street, and shattered watermelons lay strewn around, all jagged edges and pink glistening flesh. The tailgate of the farmer’s trailer must have dropped, and his load of watermelons had escaped, bouncing and rolling down the mountain.

Joe and I gaped at the mess, then silently collected all the undamaged watermelons, rolling them into a pile for the farmer to collect when he returned. As for the huge shards of damaged watermelons, we knew who would appreciate them! As we daubed pink paint on their house, our chickens feasted on watermelon.

Actually, the pink chicken house looks rather good, if a little, um… pink. Some of the  chickens have pink streaks where they’ve rubbed against the wet paint, but that’s wearing off now. They love the watermelon, and we still have plenty more to give them.

A couple of pieces of advice… I know that watermelons grown here in El Hoyo are exported to British supermarkets. So, if you are buying a watermelon, check it for bruises. Also, if you are purchasing white paint in Spain, double-check that it says ‘Blanco’, not ‘Arcilla’. ‘Arcilla’ actually means ‘clay’ but, I promise you, it’s pink. Very pink.