With all my thoughts and energies channelled into the launch of Two Old Fools in Spain Again, I haven’t taken much time off this summer. However the book is out now and, with the temperatures still soaring, Joe and I long for a swim.

Our village of El Hoyo is too small to warrant its own swimming pool, but we’re not far from a larger neighbouring village that does. The beach, too, is a similar distance away but in the opposite direction.

“Beach, I think,” said Joe. “You pack the swimming stuff and I’ll find the snorkels.”

We stopped at the supermarket on the way to the beach and bought a loaf, some cheese and fruit for our picnic. We arrived just as the beach was clearing. Only mad dogs and Englishmen go out in the midday sun. Happily, we ate our picnic then prepared to swim in the inviting Mediterranean water.

The ocean was like a mirror: flat, clear and as blue as the sky it reflected. Joe has this irritating habit of putting on his mask and snorkel (including mouthpiece) and flippers long before he reaches the water’s edge, so I always follow at a distance, hoping nobody will think we are together. Then he takes a ridiculously long time to enter the water, however warm it is, whimpering through the snorkel when the waves lap his sunwarmed skin. It can take a long time before he submerges himself. 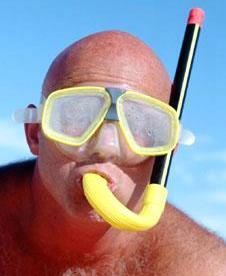 On this occasion he took longer than ever. I waited impatiently but he never waded into the water past ankle depth. I gave up and made my way down to the water’s edge to join him.

“Whatever is the matter?” I asked. “Why aren’t you swimming?”

Joe said something incomprehensible into the snorkel and pointed down. The water was so clear, even the shifting sand was visible.

I saw the problem immediately. Jellyfish. Not just one or two of the creatures, but dozens of them. Each was reddish brown, with a body the size of a ping-pong ball and tentacles that trailed five inches or so. As though in a slow motion water-ballet, they drifted and swayed in the water. Suddenly a cooling dip didn’t seem so appealing.

“Weggui Tydfil duff dawdle Hooghly jeff fly erythema,” said Joe, which I interpreted as ‘I’m not going to let this plague of jellyfish stop me swimming’. With that he zigzagged amongst them and headed for deeper water.

You’ll be relieved to know that Joe didn’t get stung that day. Just as well as the beach cafe was shut and we hadn’t brought any vinegar. Neither did we have any ointment and the shops were closed. Apart from vinegar, I’m told that male urine relieves the pain of jellyfish stings, so I wouldn’t have been much help in that department.

I wasn’t going to risk being stung so I didn’t venture into the water at all. Joe, on the other hand, enjoyed his swim. He saw scores of fish that day, many of which had arrived to feast on the jellyfish invasion. I went home even hotter than I’d left, and had to content myself with a cool shower.

We will return to the beach, but we’ll leave it a week or so in the hopes that the jellyfish will have departed. Until then, we’ll head north, not south, and swim in the neighbouring village’s jellyfish-free pool instead.