One could almost hear the howls of anguish from expats across Europe this month, and Joe’s was probably the loudest. We’d been warned, although I don’t think anybody really believed it was going to happen. But it did. One day all the BBC channels simply vanished from our screens.

“No BBC1 or BBC2?” asked Joe, desperately punching the buttons on the remote control, scrolling through the channels. “No BBC3? Or 4?”

NO SATELLITE SIGNAL IS  BEING RECEIVED advised the message on the otherwise blank screen. 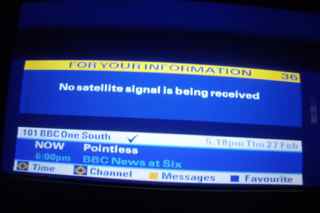 “No news? No Match of the Day? No golf? No rugby? No Pointless?”

“All gone,” I sighed. “I understand they’ve replaced the old Astra satellite, which means UK residents will get a better picture, but the footprint is smaller. Viewers in Spain and the rest of Europe won’t get anything.”

“No darts, no tennis? No World Cup?” Joe slumped back on the cushions in despair.

“Well, at least we have all the ITV channels,” I said. “And maybe it’ll force us to watch more Spanish TV, we’ve always meant to. It’ll help us brush up on our Spanish.”

I won’t reproduce Joe’s reply here, it might offend, but even he agreed that ITV was better than nothing, despite the adverts.

To be fair, Joe hasn’t had a good month. We were always aware that he had high blood pressure, but he refused to do anything about it. To my relief, after constant nagging, I finally managed to steer him to the doctor to get it checked. The doctor examined him thoroughly, made copious notes, then presented Joe with two huge plastic containers.

“What are they for?” asked Joe.

“You must collect all your urine for 24 hours. Then you must take it to the hospital for testing.”

“Really? Well, I won’t need both of these containers, will I?”

On his next visit to the doctor Joe was presented with something different. This time he had to wear a ‘halter’ for 24 hours. A band was wrapped around his upper arm, attached to a little machine at his waist. At half hour intervals the machine beeped shrilly, the band inflated and his blood pressure reading was recorded. Later, as he stood in line at the supermarket checkout, the machine beeped and his fellow customers looked around, wondering where the beeping was coming from.  The checkout girl muttered and checked her till, convinced it was malfunctioning. 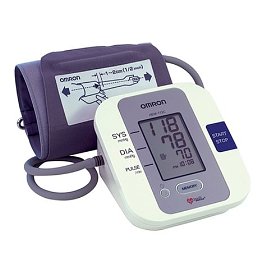 It was an uncomfortable day and night for Joe.

The doctor analysed the readings and prescribed tablets. A couple of weeks later he measured Joe’s blood pressure again and was pleased with the results. I was delighted that Joe had finally accepted treatment, and that it was working.

One might think that our way of life isn’t very stressful. After all, we are retired and no longer go to work. But something always seems to sky-rocket Joe’s blood pressure to dizzying heights.

Ten days after losing all our BBC channels, Joe switched on the TV to watch the early evening news. He hates advertisements with a passion and the ITV channels are awash with them. By now he’d just about accepted them as a necessary evil, and at least we could watch the British news. Now he stared at the screen in disbelief.

NO SATELLITE SIGNAL IS  BEING RECEIVED.

Joe’s roar could be heard several villages away. “WHAT? Have they taken away ITV too?”

Sadly, it was true.

I’m very pleased that Joe’s blood pressure has been stabilised with medication. I think that final blow may have sent it over the edge.