Two old fools, a bee and a fire

“What’s that buzzing noise?” I asked Joe as we sat in the kitchen drinking coffee. “It sounds like a giant bee trapped somewhere.” 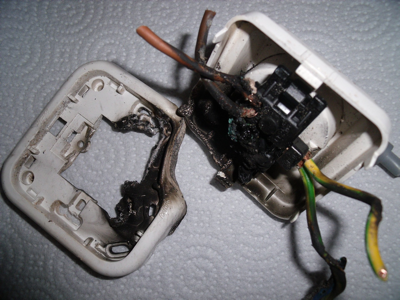 The buzzing increased in volume as we peered anxiously at the dishwasher. We opened it gingerly. No bee. Then the buzzing changed to alarming crackling noises. Bright flashes and smoke appeared from behind the dishwasher.

Joe hauled the dishwasher out, revealing flames flaring from the electrical socket on the wall. Quickly, he grabbed a towel and smothered them.

“What on earth caused that?” I asked after we’d fanned the smoke outside and muted the fire alarms. The plug was blackened and melted, it was impossible to be sure of the cause. But the emergency make me think. What if we hadn’t been there? What if the fire had happened at night? What if the flames had reached the gas bottle that feeds the hob, next to the dishwasher? I guess that would have been the end of the old fools.

What caused the fire remains a mystery, but it was a wake-up call. I’ve added ‘more fire alarms’ and ‘fire extinguisher’ to our shopping list. Joe’s checked all the other electrical sockets in the house. I’ve planned escape routes from the house in case fire cuts off normal exits, and made the seldom used back door key accessible. I’ve made a mental note of the emergency number, 112, and written it in huge letters on our kitchen blackboard. I hope we never need that number, and anyway, I dread to think how long it would take a fire engine to reach our mountain village.

So, the emergency was averted, and the old fools remain intact. But that buzzing sound is still in my head. I wonder if I’ll ever be able to hear a buzzing bee without thinking our house is on fire?