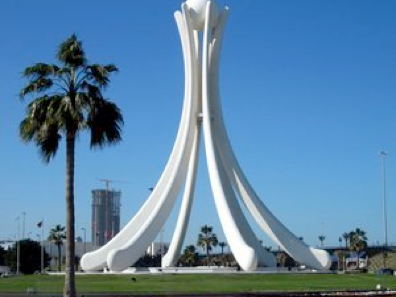 I apologise. There is no humour in this blog, just resignation and sadness.

When we arrived in the Kingdom of Bahrain last year, we were taken on a guided tour. We were shown the most famous, iconic sculpture on the island, the Pearl Monument, towering into the blue sky in the middle of a huge roundabout. The sculpture represented the importance of pearls to Bahrain’s economy before the discovery of oil in 1932.

We gasped and admired; it was gorgeous. The snowy slopes of the columns supporting the giant pearl against the cloudless sky was truly breathtaking. At night it was equally beautiful, lit up against the starlit desert night.

Then, on the 14th February 2011, the protesters arrived, and the roundabout (wrongly called Pearl Square by the media) became their headquarters. The authorities tried to forcibly evict them using tear-gas and live ammunition, and lives were lost. The protesters regrouped and violence escalated on both sides. The authorities withdrew and a small town sprang up on the roundabout. Tents were erected housing protesters and their families, generators, shops, all the things that support a community. The Pearl Monument had become the symbol of the protests.

When the Saudi troops arrived, the roundabout was cleared. Some protesters set fire to their own tents and used molotov cocktails, and the police and militia were equally violent. More lives were lost from both sides. 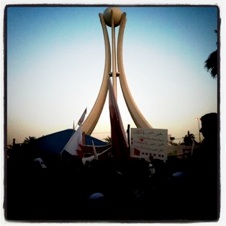 So it was with sadness, but no surprise, that we heard that the proud monument which had witnessed such violence and sorrow was demolished yesterday in the dead of night. No longer would it remind the islanders of what had happened beneath its shadow. The proud giant toppled and lay in broken pieces on the same ground where corpses had been stretched out so recently.