On the other side of our valley, there’s a holiday house owned by Brits. They rarely use it and most of the time it stands locked and unused.

In the last week of August, Geronimo and his mule passed our house and stopped to bang on our door. 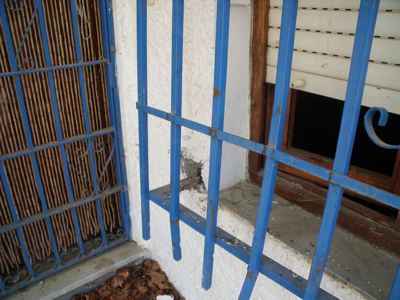 “Somebody tried to break into the English house,” said Geronimo, thus passing the responsibility on to us.

We walked over to check it out for ourselves. The house is surrounded by Spanish oaks, and summer-baked acorns crunched under our heels as we walked round the property.

The attempted break-in was obvious. The thieves had tried to dig out the burglar-bars (see pic) but failed, apart from one corner of the living room bars, which they’d managed to pry loose (see pic above). The sliding shutters were forced open and the window-glass shattered. Despite the damage, we doubted anyone, unless he was a monkey or contortionist, had succeeded in getting in.

The interior was too dark to observe any details, so I stretched my arms though the broken window and snapped a few photos, relying on the flash to capture any evidence. The pictures looked fine to me. I could see an occasional table, a sideboard, and all looked tidy and undisturbed.

Back home, I emailed the bad news to the owners. I included pictures of the chiseled-out window-bars and interior, plus our doubts that anything had been stolen. However, we were wrong.

Back came the reply: “They DID get in! There was a flat-screen TV on that sideboard and a computer on the little table. Could you please report it to the police? And find some workmen to fix everything?”

So Joe and I drove down the mountain and went to the Guardia Civil offices, armed with the photos on our iPad and the owners’ details. They examined the pictures and consulted each other.

“I’m afraid we can’t do anything without a fax number,” they said. “We need to fax the documents to the owner.”

A fax number? Who has a fax machine nowadays? Why couldn’t they just scan and email? No, they insisted, they needed a fax number.

I emailed the owners and wasn’t surprised when they admitted to not owning a fax machine, but they rushed out and bought a ‘splitter’ or something.

I returned to the Guardia Civil offices and triumphantly produced the owners’ fax number.

“Fax number? We don’t want that,” they said. “We can’t do anything without your passport.”

It was at that point that I gave up. I was due to fly to Australia in a few days, and I was NOT willing to surrender my passport.

We passed Julio’s telephone number and email address to the home owners, and, far as I know, when September arrived, Julio returned and fixed everything. I imagine the Guardia Civil did nothing, but I may be doing them an injustice.

So if you see a monkey, or a contortionist, watching a flat-screen TV and using a computer, could you please report it to the police? Oh, and don’t forget to take a fax number and your passport.