Schnitzel for dummies with tragic mash

I’ve never made schnitzels before, but my friend and website designer, Elle, assured me that it was very easy. She’s right, it’s a bit fiddly, but delicious and well worth the effort.

The raw ingredients. Not the wine, that was just chef’s perks.

“I’ll do the mashed potato and the veg,” said Joe. We had loads of fresh veg in the fridge, so I left that for him to organise. I concentrated on the schnitzels. Silly me.

I used:
Some chicken fillets
1 egg
About 100ml (in other words, a glug) milk
Handful of flour
Breadcrumbs (made my own from a stale loaf whizzed in the blender)
Some smoked paprika

Elle said that if the chicken fillets weren’t flat, to bash them with a rolling-pin or other suitable blunt instrument. Luckily, mine were already thin pieces.

I sprinkled the flour on one plate and the breadcrumbs on another. I dipped the chicken fillets into the flour, flipping them until they were coated. 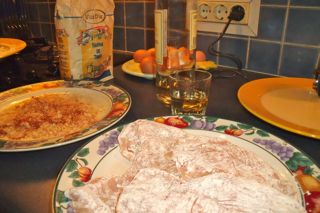 Coat the fillets in flour

Next, I beat the eggs and milk together and poured that into another plate. We have a brand new Kenwood hand blender which I absolutely love. Stay with me, there’s a point to mentioning the blender.

“I’ll use that for the mashed potato,” said Joe. “It’ll save time.” I knew he didn’t want to miss the football on the telly. He’d offered to do the veg, so I wasn’t going to interfere. 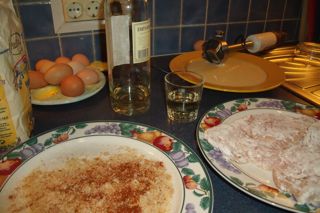 Breadcrumbs – with a good sprinkle of smoked paprika. You can see our fantastic Kenwood hand blender resting on the egg-and-milk plate.

Next, the messy bit. (I use surgical gloves, because I don’t like the feel of raw chicken, and it stops the flour and stuff getting under my fingernails.) Dip the floured fillets into the egg-and-milk mix, then smother with breadcrumbs. 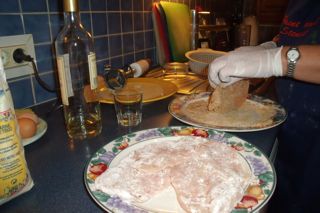 “How are the vegetables getting on?” I asked.

Well, my schnitzels were ready to cook, and apart from the potatoes boiling over, there was no visible progress on the vegetable front. 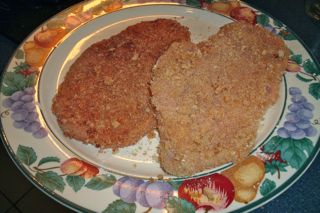 Joe took the potatoes off the wood-burner, dripping water across the kitchen floor, and I started frying the schnitzels. I knew they wouldn’t take long. I wondered what vegetables he was planning. Perhaps he was going to slice a few peppers, mushrooms and other raw veg, and stir-fry them quickly? I didn’t ask because I didn’t want to nag. 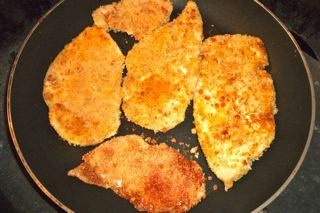 Schnitzel cooking on the wood-burner.

The kitchen was filled with the roar of the Kenwood blender. It makes short work of vegetables, turning them into beautiful homemade soup in seconds. I wondered how the mashed potato was coming along.

“Did you remember to add a splash of milk and some butter?” I asked, when the noise  stopped.

“I put in extra milk, to make it nice and creamy,” said Joe. Pause. “Um, I think I may have overdone it…” 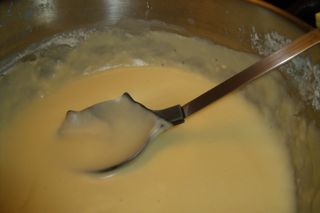 The blender had done its work perfectly. Too perfectly. You could have poured the potato from a jug.

“What about the vegetables? The schnitzels are almost ready.”

Just then, the bell on the microwave rang – ting!

“The veg is ready,” said Joe, and lifted out a bowl of newly-microwaved frozen peas and corn.

“These are fresh! Just frozen, that’s all. The football is starting, and I didn’t have time to use the stuff in the fridge. Come on, I’m going to dish up.” 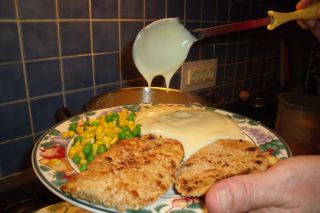 So he did. The schnitzels were beautiful, golden brown and crispy. The peas and corn were, well, peas and corn. And the ‘mashed’ potato? Wallpaper paste springs to mind. It spread over the plate like an alien invasion. 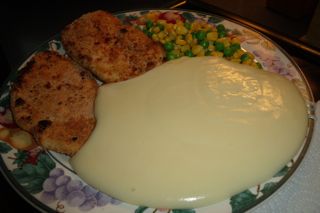 The football was in full swing, so we set the lap-trays (another favourite of ours for TV dinners). I was going to make a nice sauce with another recipe Elle gave me, but Joe wanted Bisto gravy. You can take the boy out of the UK, but you can’t take the UK out of the boy… 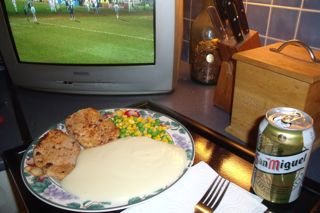 I have to admit it, the schnitzels were a triumph. The peas and corn were, peas and corn, and the wallpaper-paste mashed potato was surprisingly edible. I suppose the proof of how we enjoyed it is this final picture. 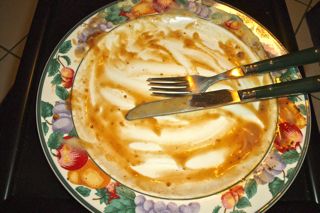 In case you’re interested, our beloved  Kenwood Hand Blender is this one. 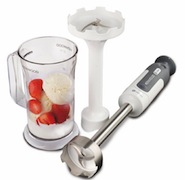 And the lap-trays, beautiful to look at, filled with beans, stable on your knees even when Liverpool score, are these: 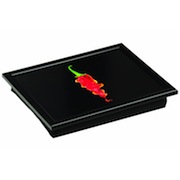 8 Responses to Schnitzel for dummies with tragic mash