This month we had our niece, Becky, to stay. Joe and I were a little concerned that she’d be bored, as there isn’t even a restaurant or bar in El Hoyo. How would we entertain her?

We needn’t have worried because Becky was perfectly happy sunbathing on the roof terrace, flirting with the builders down the street and happily, her visit coincided with the festival of San Juan. 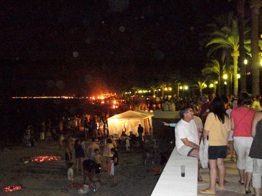 San Juan (St John) is an important event in the Spanish calendar. It marks the arrival of summer and the shortest night of the year. All day, families prepare by setting up tables and chairs and building huge bonfires on the beach.

We drove down to the beach at 10.30pm and joined the jostling throngs. The beach was packed with people, from tiny babies to ancient grandmothers. The waves crashed, bonfires blazed and Spanish guitar music and smoke filled the air. Not having a bonfire of our own, we ordered drinks and watched.
Some groups were barbecuing, others dancing and singing, but, as midnight approached, the atmosphere changed. Encouraged by cheers and applause, athletic individuals jumped over the smaller bonfires, which, according to legend, cleanses the body and soul. Then midnight struck, and, like lemmings, the revellers marched into the sea, en masse, as it is believed that the water will wash away evil spirits. Fireworks exploded and soared into the sky. It was a magical night.

Becky and I went to the beach next morning expecting to see the party’s aftermath. But at daybreak, as the last party-goers drifted away,  tractors had arrived and raked and cleaned the beach until not a scrap of charcoal remained… 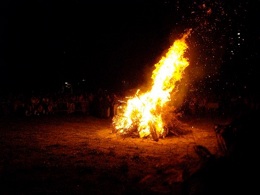