I first came across Scott Bartlett and his wacky book, ‘Royal Flush’, back in 2009. The writing made me laugh then, and so did the author, a charming young Canadian. The novel is finished and published now, collecting a prestigious award along the way. If you like quirky, well-written humour, you’ll love this! 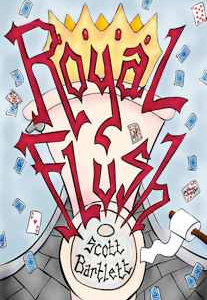 In the following scene, the King’s castle is stormed by a group of highly-trained soldiers. They are repelled using unorthodox means.

A trumpet sounded in the distance. The King looked up, unenthused. His interest grew when he discerned a flood of movement on the apex of Shepherd’s Hill. He squinted. A swarm of black-clad figures was cresting the summit, only to rush down the side nearest the King. It seemed to be some sort of a parade, or a marathon, or perhaps a…

…a vast host of armed warriors, dressed in the same uniform Private Reginald had worn.

The trumpet blared again, inspiring the King once more to scamper down the hallways. This time, he screamed uncontrollably.

“Your Majesty!” Frederick called as the King ran past the room in which he and Eliza cuddled. “Whatever is the matter?”

The King entered the room and paused to catch his breath, holding up a finger. Finally, he was ready.

“What is it?” Frederick said urgently.

“It can’t have been very important. I’ll let you know if I recall.” The King left the room again.

Frederick and Eliza returned to snuggling.

The King came barrelling back in. “I remember now!” he shrieked. “Invaders! Approaching the castle!”

Frederick jumped up. “Is the drawbridge closed?”

The King thought this over.

“Then let’s go!” They dashed out of the room.

“Bring your fiddle!” said the King. They dashed back. Frederick tore open the case and extracted his instrument.

They dashed out again.

Downstairs, the attackers were already rushing into the entrance foyer.

“Hey!” Frederick shouted from the stairs, his voice cracking. The King cowered behind him. “Get out of here!” Frederick brandished the fiddle.

“Assail them!” ordered the King from over the fiddler’s shoulder.

By now completely pale, Frederick proceeded hesitantly down the staircase. “Hey!” he shouted again. He swung the instrument in a clumsy arc.

The black-uniformed soldiers drew up hastily. “Hold it, boys! He’s got a fiddle.”

“Is that a Stradivarius?” asked another soldier, who wielded a broadsword.

“Skilfully crafted, though,” said the swordsman. The invaders all agreed.

Another piped up. “Hey, now, you’re not going to hit us with that, are you?”

“I’ve been thinking about it!”

“But you might damage it,” a thoughtful young corporal observed.

“You shouldn’t jeopardize a decent piece of equipment like that.”

“Instruments like that are hard to come by nowadays.”

“I’ll just have to do without!” the fiddler said, a wild gleam in his eyes.

The soldiers muttered among themselves. “Bloody maniacal,” one said. “Not a shred of respect for good craftsmanship,” said another.

The corporal cleared his throat. “If you’re not going to be reasonable, then we’ll have to. Come on, men. We’ll find another way in. On the double, now.”

The soldiers filed out in an orderly fashion. The King rushed up to the winch that controlled the drawbridge and cranked it for all his worth.

“Play me a mournful tune,” the King requested… 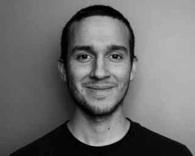 Scott Bartlett has been writing fiction since he was fifteen. His recently released novel, Royal Flush, is a recipient of the H. R. (Bill) Percy Prize. Click here to buy the ebook ($3.99) or to order the print book ($12.99).