Part of a random chapter from “Chickens”

“The beach?” said Judith one day. “Mmm, quite fancy that meself! Let me know next time you plan to go, m’dears. Mother won’t come, stays out of the sun, don’t you know. But I’ll join you.  Haven’t been to the beach for ages! Yes, that’d make a nice change.”

Judith a beach babe? I couldn’t quite picture that. And I knew with absolute certainty that a day on the beach with Judith would be eventful.

The next time Joe and I planned a day at the beach, we did as Judith asked and phoned her.

“Beach tomorrow? Spiffing, dear! I’ll be ready, just pick me up on your way down the mountain.”

The next day, we stopped at her house and knocked on the door.

Judith was fully prepared. A day at the beach was obviously an event to be taken seriously. Joe loaded her stuff into the jeep. Items included a parasol, rugs, folding chair, wicker picnic hamper, binoculars, several towels and a choice of reading matter. And she looked the part. Resplendent in a cotton shift the size of a Boy Scout’s tent, she’d topped it off with a giant sombrero. Sunglasses obscured her face. Off we went, Judith holding on to her sombrero all the way down the mountain.

We always avoided the heavily populated tourist beach and instead chose the stretch the Spanish preferred. There were no souvenir shops or amusements, but we could park the jeep on the sand and enjoy seclusion. We always brought our own drinks and picnic, but there was a shack on the beach that served as a cafe, should we need it.

It took a while to unpack the car and get settled, and we were hot and perspiring. Both Joe and I were anxious to get in the water and cool off.

“Coming in for a swim?” I asked Judith.

“Not yet, dear. I’ll read me paper and get lunch organised. Brought enough for all of us, don’t you know.”

Joe and I swam for a while then rejoined Judith. She’d been busy in our absence. Spread on a white cloth was a feast. Triangular crustless sandwiches, home-made sausage rolls, scotch eggs, bowls of fruit; it was like a piece of England.

“Bottoms up!” said Judith, handing us long-stemmed glasses of Pimm’s.

After lunch, contented and full, Joe and I stretched out on the sand to sunbathe.

“Damned hot!” said Judith. “Think I’ll put me bathing costume on and go for a dip.”

Joe politely averted his eyes while Judith wrestled with changing. She disappeared from view completely under an enormous towel. We heard her grunting, and the flailing under the towel made me think of wildcats fighting in a sack. At last the towel dropped and she was ready. Smelling faintly of mothballs, Judith’s swimming attire was serviceable, but definitely not designer. It was black and large with built-in pleated skirt, reminiscent of the nineteen-fifties.

“Look out for jellyfish,” said Joe as Judith made her way across the hot sand to the water’s edge. Famous last words.

Minutes later, an almighty yell woke us from our doze. Judith, sombrero awry, was exiting the water at a rate of knots. Joe and I jumped to our feet.

“Jellyfish! Bloody critter got me…” spluttered Judith, wincing and holding her leg. “Hurts like hell!” The rash on her leg was already swelling and angry looking. She sat heavily on the sand, her face creased in pain.

I looked around, but there was nobody on the beach apart from a family some distance away. Judith was suffering; she was writhing and clutching at her leg. Jellyfish stings are notoriously painful.

And then I had an inspiration. I love TV survival documentaries, the kind where the presenter makes an A-frame shelter from palm leaves and rubs two elephant beetles together to start a fire. A bit of trivia I had absorbed suddenly surfaced.

“Pee on her leg! It’ll take the sting away!”

“Don’t be ridiculous! I can’t just pee on Judith!”

“Good Lord,” said Judith, extending her leg. “If it’ll take the pain away, just bloody DO it!”

“Well, I could … but you’ll both have to look away.” Joe was crimson with embarrassment, and scratching his groin in consternation.

For a long moment he just stood there in horror. Then, realising that both Judith and I were deadly serious, he eased his trunks aside, took aim, and began urinating on Judith’s leg.

He was still in midstream when a shadow fell across us. We became aware we were not alone. The man from the distant family group had joined us, presumably having noticed Judith’s predicament. Politely, he held out a tube of ointment.

“¿Medusa?” he asked quietly. “Jellyfish? This ointment will take away the sting immediately.”

Joe swung away, tucking himself back into his trunks as fast as he could. The Spanish man avoided looking at Joe, didn’t comment on his bizarre behaviour. Instead, he splashed water on Judith’s leg, then gently applied the ointment. The relief, according to Judith, was instantaneous.

“Vinegar also works well,” said the man, now looking pointedly at Joe, then nodding towards the cafe up the beach… 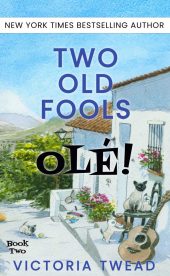