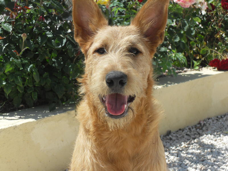 Firstly, I must thank the dozens of kind people who sent me emails of congratulations when ‘Two Old Fools – Olé!’ appeared on Amazon a couple of weeks ago. Thank you so much, and I’m sorry I couldn’t reply to you all individually. I read and enjoyed each one hugely, thank you, especially the chatty ones, and the one with the picture of Dennis the Bionic Dog. (see pic)

Why does everything always happen all at once? This month has been crazy… So what’s been happening?

1) The village fiesta. This is never a quiet affair. For the whole weekend, processions marched past our front door, (see pic) fireworks exploded and the dancing in the square carried on until 6 o’clock in the morning. We’re still finding rocket sticks in our garden and the chickens have gone on strike, flatly refusing to lay. Frankly, I don’t blame them. I couldn’t lay an egg with that noise going on. 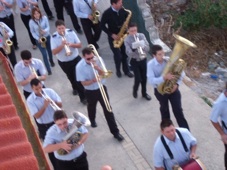 2) ‘Two Old Fools – Olé!’ was released. The telephone never stops ringing and my email inbox is full to overflowing. The paperback edition will follow shortly, but the Kindle edition is already doing astonishingly well. Thank you, kind readers!

3) The Gin Twins came for their annual visit. Of course they were as badly behaved as ever, (see pics) and I dread to think how many bottles of gin they consumed between them. But we had a blast. We went exploring villages, got lost numerous times, lazed by a friend’s pool, played Rude Scrabble and ate and drank far too much. My face still aches from laughing.

4) Mysterious water started trickling out of the workshop wall. Joe investigated and smashed up a bunch of floor tiles, then dug into the wall until he found the cause. A piece of copper piping had developed a hole and the water must have been trickling gaily for weeks, judging by the state of the wall. Our house walls are a metre thick and made of stones and mud, and the whole area is saturated. It’ll take a few weeks to dry out but at least it’s not inside the house.

5) Workmen appeared in the village. I thought they’d come to take down the fiesta lights and bunting, but no, I was wrong. Instead, they’ve been noisily digging random holes in the street outside our house. Our water is cut off at intervals, always when somebody is in the shower all soaped up, or when we’ve been digging in the garden (or workshop floor) and desperate to wash our hands.

So, I offer a piece of friendly advice. If you’ve been toying with the idea of moving to rural Spain for some peace and quiet, perhaps you should reconsider. Living in a remote Spanish mountain village is  not necessarily the undisturbed, tranquil lifestyle you may have imagined…