In an effort to get fitter, Joe and I have started to take daily walks up the mountain. It’s worth it for the view from the top and we see something new every time.

Last week, we spotted what looked like a four foot long, wriggly worm. On close  inspection, we realised it was a line of caterpillars, nose to tail. We were enchanted, never having seen them before, and I mentioned it on Twitter later.

What a response I got!

“They’re KILLERS! Don’t go near them!”

“What is the point of those evil things?”

“Avoid at all costs!”

As you can imagine, I was a little taken aback… 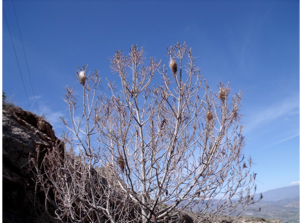 A pine tree, devastated by caterpillars

It seems that these are Pine Processionary caterpillars, destined to hatch into unremarkable brown moths. The female moth lays her tiny eggs in a pine tree, up to 300 eggs at a time on one pine needle. The eggs hatch and the caterpillars grow quickly, feeding furiously on pine needles at night. They spin a white fluffy bundle in the tree to house their community until February or March when the colony abandons the tree in a long line, searching for soft soil to bury themselves and pupate.

So why the horror? Well, if disturbed, the caterpillar sheds its hairs. The hairs cause painful rashes, or worse. If inhaled, they can be lethal. An inquisitive dog who has inhaled these hairs needs to be rushed to the vet within 40 minutes. Children and adults can also suffer severe reactions, including anaphylactic shock. Even walking under trees with the bundles can be dangerous as the hairs are often airborne. In addition, the pine trees themselves are devastated by these furry fiends, and often die.

Whew! Yet another Spanish learning curve for us old fools. 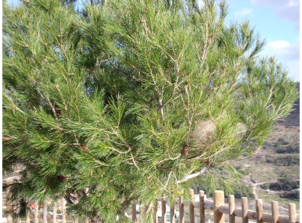 The first caterpillar bundle in this pine tree