I feel as though I’ve given birth to an elephant. I’m exhausted. In the very early hours of the morning of Friday, 25th of July, 2014, after a long painful labour, Two Old Fools in Spain Again was born, weighing just one pound. That’s the paperback, of course, the Kindle edition weighs nothing at all.

It appeared on Amazon and has been popping up on other platforms like Nook, Apple, Kobo and Scribd ever since. It’s the 4th in the series but that doesn’t stop me being just as excited as when each of my other babies was born. That feeling never seems to wear off. 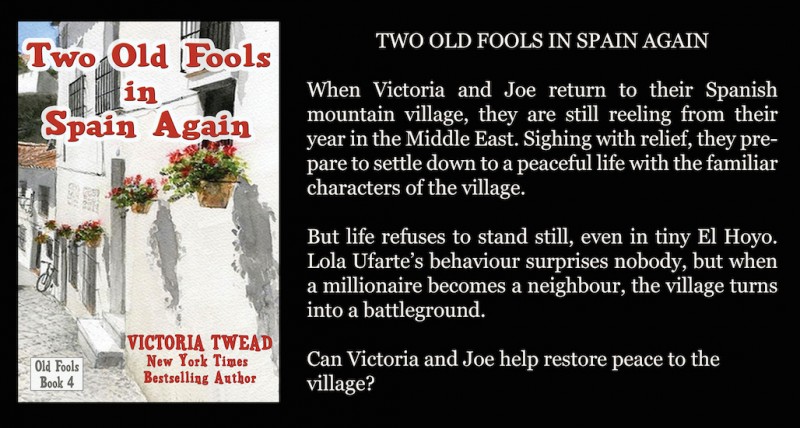 Thank you to my loyal readers, you overwhelm me. Within 24 hours, Spain Again reached the #1 spot in the Spain category of Amazon, top 10 in Memoirs, and was in the top 500 out of MILLIONS of books. That is awesome. Even more awesome, readers have started leaving reviews already, so I’ve quit worrying that people won’t like this latest book.

I have vowed never to write another book as this one took nearly two years of worry,  gallons of coffee and barrels of midnight oil. Famous last words. From past experience, I know that my fingers will soon itch to bash out another few chapters in the Old Fools’ saga.

Where to find my baby: