Joe and his derriere suffer again…

I’ve mentioned before that you can tell the season just by listening to the sounds of the village. This month there are two new sounds; a clicking noise, and braying.

The clicking sound is made by poor quails that are kept in little domed cages and hung on the walls outside houses. They’re females and will be used as decoys later in the season. The cage is set down, the bird calls and the males are attracted. Bang! and the males are shot for eating.

Of course Joe and I heartily disapprove, but that’s what the villagers have been doing for hundreds of years, and I know we’ll never change them. 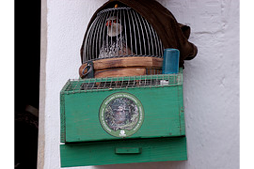 The braying belongs to Geronimo’s new donkey. (If you haven’t read ‘Chickens’, Geronimo is a sort of village policeman, very kind, football-mad, with a liking for beer and brandy.)

Geronimo tethers the donkey around the village to graze, often close to our house. Joe was concerned the other day because the donkey had wound its long tether round a tree.

‘I’ll untangle it,’ he said, and grabbed the halter. Would the donkey come? No. He tugged and coaxed and pulled… The donkey dug its heels in and refused to move. 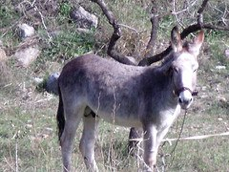 Joe shrugged, let  go and walked away. Immediately, the donkey followed, so Joe walked round and round the tree until the rope was unwound. Success!

Joe stopped, and that was his mistake. The donkey nudged him, then gave him a friendly, but meaningful nip in the backside.

I think Joe may have acquired a second permanent scar on his derriere. As you may know,the first was caused by The Rainbow Man (Chapter 27 in ‘Chickens’) and now Geronimo’s donkey.

I do try hard not to laugh, honestly…