Victoria Twead, author of the book Chickens, Mules, and Two Old Fools, stopped in at EWN today for chat. What great fun we had, as we talked about the book (just a bit), the World Cup, El Hoyo, and Joe.

The chat really was more like a chat than a proper interview. Carrie stopped by and the girls chatted about home (England) for a bit. The mood was playful and relaxed. Just how it should be.

Actually, home for Vicky and Joe is now the mountains of Andalucia, an autonomous state of southern Spain. ‘Chickens’ is the telling of how Vicky and Joe  came to give Spain a go as a permanent residence.

The book is a pure joy to read as we are taken to the village and shown the wonders of  humanity and community. To find out more about the book, read the EWN review at Chickens, Mules, and Two Old Fools | Book Review.

As a bonus, there is a trivia question following the interview. The first comment that has the correct answer will get a free copy of ‘Chickens’, courtesy of Extreme Writing Now.

EWN: Is El Hoyo in one peice after the post World Cup celebrations?

EWN: In other words…pride runneth over, no?

Vicky: ¡Si! Spain are so passionate about football anyway, and winning the World Cup was just mind-boggling for them!

EWN: Were you hoping for an English win of the tourney, or rooting for Spain from the beginning? 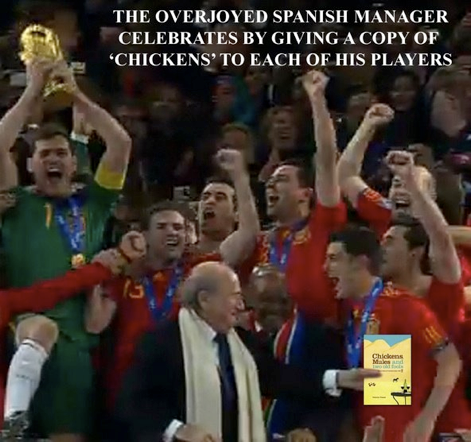 Vicky: Haha! Joe and I kept our options open. The English team were just embarrassingly poor, so it was good to have another team to support. And they won!

EWN: Always good when plan B works. Was there a lot of good natured cajoling from your neighbors?

Vicky: Actually, surprisingly, no. The Spanish have a huge respect for English football, and a few of the Spanish team players (eg. Fabregas, Alonso) play for English teams in the Premier League.

EWN: I bet Geronimo is going to earn his beer after yesterday’s win.

Vicky: Geronimo is not to be seen this morning. The last time I saw him was when he was climbing the church tower to ring the bells last night. He may still be in the tower…

EWN: Waiting for the fog to clear so he can climb back down?

Vicky: Probably! He’s such a nice man, though. The dreaded drink is his only downfall.

EWN: All your neighbors and friends seem like such nice folks. Chickens, Mules, and Two Old Fools really made me feel like I was there. Like I knew everyone. 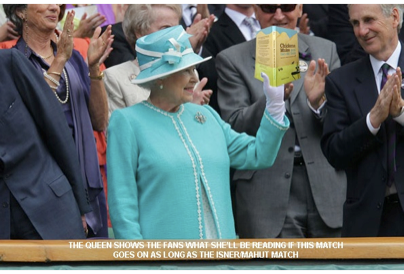 Vicky: Well, it’s nice to hear that. The village is packed with eccentric characters and we’re proud to be one of them. I think they’ll always call us The English, but we have been made so welcome. Yesterday, an old man came round with a bowl of freshly picked cherries that he thought we’d like. That sort of thing happens every day.

At this point, Carrie logs in to join the fun

Carrie: I am indeed

Carrie: not originally but am here now

EWN: I’ve been to London, Ohio and  London, Ontario

Vicky: Ah, like me. I’m a West Sussex/Dorset lass.

Vicky: Not been to Ohio or Ontario.

EWN: I’m pretty sure that you just didn’t decide in that instant you were staring out the rain streaked window into the dismal English weather that you wanted to move to Spain . How long was the ‘itch’ growing, and did it really take some nerve to tell Joe what you wanted to do?

Vicky: No, you’re right. Moving to sunnier climes was always a dream, and had been eating away at me for some time. Telling Joe wasn’t easy, but I usually get my own way in the end. The secret is to turn things round so he almost believes that it was his idea in the first place. Ooops, he just read that over my shoulder.

EWN: I’ll let you in on a little secret that will get me booted from the Men’s Club.Turning things round so we almost believe that it was our idea in the first place is a universal weakness.

EWN: How long did it take Joe to live down his close and personal run in with Indalo?

Vicky: Haha! Poor Joe. There’s still a slight reddish imprint on his backside, but I prefer not to examine too closely.

EWN: LOL…want no part of the ills that may follow?

EWN: Joe is a real stand up kind of man, isn’t he?

Vicky: Hmm… Is that American jargon?

EWN: Well…maybe. I bet he did a lot of standing after that run in! Actually, it just means he is a great , one of a kind gentleman (your chance at bonus points with Joe)

Vicky: Joe is amazing. Short-fused but incredibly gentle, generous and kind. (Joe’s dictating to me here.) Actually, not true, he really does have those qualities, and he cooks a mean curry.

EWN: Was it Joe, or you that named that chicken Fuck? And why?

Vicky: Haha! How did I know you’d ask that! The two black chickens were even more curious than the others. They’d untie your shoelaces, trip you up, look in your pockets, etc. Joe swore at them so often, the two names just kind of stuck…

EWN: Lol…funny thing, I wasn’t even mildly shocked that the name was there. It seemed to flow in so naturally.

Vicky: So far, (touch wood) I haven’t had a bad review, except for some American ladies who liked ‘Chickens’ but were offended by those names. I apologised to them.

EWN: The way you describe your friends, neighbors and family in Chicken, Mules, and Two Old Fools was one of the big hooks (out of many) for me. I have mentioned caricatures and Carl Hiaasen only because your descriptions are not too far over the top and leave me with visual images or references. For instance: Judith reminds me of a more genuine Hyacinth Bucket (Patricia Routledge) with Julia Child’s voice. Did you mean to write them as near caricatures?

Vicky: Gosh! No, not consciously. I think it’s just the way I see people. You know how you can pick keywords from a sentence? Well, I seem to do the same thing with people in order to get their ‘essence’ across. Does that make sense?

EWN: Yes. Makes perfect sense to me. We remember features that tell the tale.

Vicky: May I ask you a question?

Vicky: In your amazing review of ‘Chickens’, you said, “Now comes the clincher: I found a couple of awww moments in the book, so I’m sure that some of you ladies will need a tissue or two, especially if you read the same line that sent shivers down my spine when I read it.” My question, and I lie awake thinking about it, what was that line? I can guess, but I’m not sure… (If it’s a spoiler, don’t say…)

EWN: Well…it was the last line. That line tied a pretty bow around the entire  package.

Vicky: Well, you’ve surprised me! No, I guessed completely wrong. The Pepa, my favourite Egg Customer, incident reduces me to tears every time I think of it, but I didn’t guess the last line. Thank you!

EWN: Yes…that was the other moment. You are quite welcome.

EWN: The newsletters remind me of letters from home. El Hoyo really is home, isn’t it?

Vicky: Most definitely! Even when we’re away on a shopping trip, or whatever, both Joe and I feel homesick.

EWN: That’s wonderful! Would love to visit sometime. How about you Carrie? Wanna go?

Vicky: Our visitors usually say something like, ‘A bit third-world, isn’t it?’ but after a while, the charm of the village gets to them. Then they understand why we’ve made it our home.

EWN: For some reason, third world doesn’t reside in my vocabulary. I think I could see greatness no matter where I am standing.

Vicky: There are down sides too. Like poor TV reception, trying to figure out what official letters mean, trips to shops are an entire day affair, very cold in winter, etc.

Vicky: Flies. I forgot the flies. And more flies.

EWN: But, those never overcome the companionship and the terrace, right?

EWN: This has been a great joy. I want to thank you and Joe for the time. Carrie? Any questions for Vicky?

EWN: I could actually do this for hours

Carrie: No, I think you covered it all;  it’s been interesting to hear about you, Vicky

Vicky: I can’t thank you enough for the fabulous review you gave ‘Chickens’, Alex. It absolutely made my day, well, week, actually. You were too kind. And thank you for this interview, both of you, I’ve thoroughly enjoyed it.

EWN: You are quite welcome, and thank you for the joy of the tale.

Vicky: You are most welcome.

EWN: Like I said, just a wonderfully informal chat that I hope you all enjoyed as much as I did.

Thanks again to Vicky, and to Joe for lending her to me for a couple of hours. And thanks to the wonderful Carrie for stopping in.

Now, as promised, here is that trivia question for a copy of Chickens, Mules, and Two Old Fools:

Q: Andalucia is famous for its variety of small portions of food, usually served with sherry, wine or beer. What are these dishes called?

Be the first to answer correctly here and I’ll send you the book.