New Year in our Spanish Village

Our village is so tiny that there is only a handful of permanent residents. Uncle Felix, a retired goatherd who shares his cottage with his beloved mule and two chickens. Ancient Marcia who runs a shop selling sweets, beer and cigarettes and very little else. Geronimo, a gentle, football-mad kind of village policeman who enjoys his beer perhaps a little too much. And us.

Well, New Year’s Eve was interesting. The village was filled with people enjoying the holiday and getting away from their city lives. The Spanish have this tradition where you are expected to swallow one grape every time the clock strikes at the midnight hour. Each chime, and grape eaten, will bring luck in the coming twelve months of the year. So Joe and I walked down to the church at midnight as usual, clutching our twelve (seedless) grapes.

If you’ve read ‘Chickens’, you’ll know our church clock is rather erratic. It usually chimes twice, so at midnight it’ll chime 24 times. Sometimes it doesn’t chime at all. At midnight, Marcia, Uncle Felix, Geronimo, all the villagers, Joe and myself waited with baited breath, grapes poised.

Geronimo was obviously expecting this hitch, so he began to climb up the rickety ladder to the church tower. We all watched, the village ladies ooohing and aahing as he climbed, Joe and I worrying about how much beer he had consumed earlier. 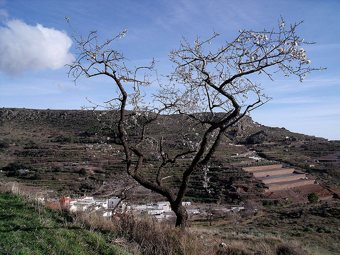 Well, Geronimo had obviously done this many times before. When he reached the bell, he drew out a hammer from his back pocket. Twelve times he clanged the bell, so loudly that it reverberated round the valley, echoing as it bounced off the mountains. The grape ritual began. I choked on grape number 6 and had to be slapped on the back by Paco, our next door neighbour. Joe got off to a good start but only managed 10.

After the usual round of cheers, kisses, hugs and ‘Happy New Year!’ we wandered back home, Joe still complaining that Geronimo had rung the chimes too fast. Looking back over our shoulders, we could see Geronimo’s silhouette against the night sky, high up in the church tower, taking a hefty swig from his beer bottle.