(Joe and Vicky have become unwilling baby-sitters for their neighbours’ children.)

I heard the activity long before I reached the kitchen. Standing in the doorway, my eyes swept the scene before me. The fairy twins were cross-legged on the floor, Joe squatting with them. Cupboard doors hung open, and most of my saucepans and wooden spoons were already spread all over the tiles. My heart sank. Where was the orderly kitchen I had left just moments before?

“Um, we were just playing Cooking,” said Joe, looking up at me a little guiltily. The fairies didn’t look up, they were far too busy.

“And the boys?” I asked. I was feeling a little weak.

“Outside. In the garden.”

The bang-bang-thud of the football as it ricocheted off the walls and my cherished raised flowerbeds and plant pots made me wince.

“Would you believe it? Their parents have gone shopping,” I said in English. “And left all their kids with us…”

“I know,” said Joe, beating an imaginary cake mix with my silver soup ladle. “The kids told me.”

“Not a lot we can do about it,” Joe shrugged. “Anyway, it’s nice to have little kids around, I suppose. Didn’t I tell you things were going to change?”

I sat down and watched the fairies playing. They were totally immersed in their game. Fairy #1 cracked an imaginary egg into a bowl, while Fairy #2 stirred.

“You can have some when it’s ready.”

“But only when it’s cooled down.”

“Because it’s not good for you to eat warm cake.”

“But only if you’re very good.”

I was enchanted. These little girls were repeating word for word what they’d heard their Mama say a thousand times as she baked.

“Well, you’re both doing a grand job!” said Joe, getting up and stretching. “I can’t wait to taste it when it’s ready.” 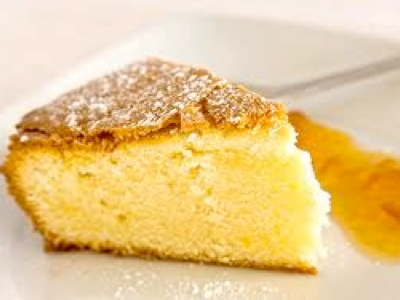 This is a very quick sponge, quite dense in texture with a lovely lemony tang.

Divide the sugar in half. Separate the eggs and beat the whites into one half of the sugar until the mixture is stiff.

Beat the egg yolks into the other half of sugar, then fold the two halves together.

Sift the flour and baking powder. Add the lemon  and add to the mixture, little by little.

Place in a lightly greased round baking tin and bake in the middle of a pre-heated oven at 180 degrees for approximately 20 minutes.

Note: The Spanish often eat bizcocho for breakfast with coffee or hot chocolate. It is also delicious as a dessert served with ice-cream.