Logs and a Yorkshire terrier

We never know exactly when the Log Man is coming. He just turns up, usually early in the morning, before we’ve woken up properly. He leans on the doorbell, and when I open the door, he grunts, ’Leña’. Not as a question, just a statement; ‘Firewood’. 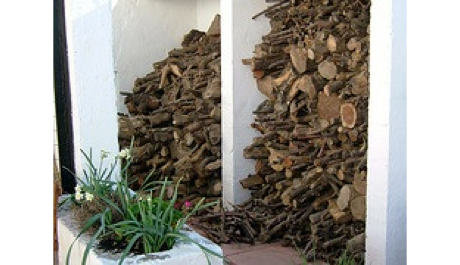 Winter approaches, the Log Man is here.
It happened today. It would be tempting to say ‘No, thank you,’ but we know we’d regret that. If we didn’t accept it, we’d have to collect it ourselves, in our jeep. That would mean one trip every week just to keep our greedy wood-burning stove happy.

No, it makes sense to have it delivered. Even if it means three hours of hard work. The Log Man lets down the side of the lorry, and stands aside to allow his young helper to climb up and throw all the logs into the street. They soon pile up into a precarious heap, round logs avalanching down the pile and rolling everywhere. 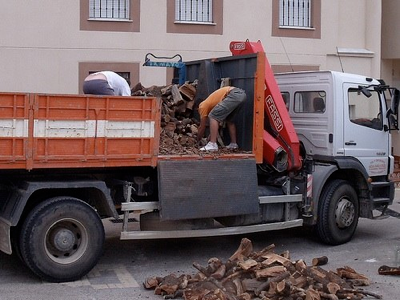 Today, Joe felt sorry for the lad and climbed up onto the lorry to help him. The Log Man made no effort to assist, and the two workers soon had an audience of villagers, children and village dogs. When the lorry was empty, the lad sprang down. Joe jumped down too, but forgot he was probably 45 years older than the lad. He landed badly, then stepped back on one of the round, rolling logs. He ended up on his back, legs flailing, like an over-turned tortoise.

The spectators gasped and the Log Man and lad pulled Joe back onto his feet. Then, from nowhere, out shot Lala, our neighbours’ spiteful Yorkshire Terrier. Lala darted through the crowd and made straight for her arch enemy, Joe. Before he’d composed himself from his fall, Lala sank her teeth into Joe’s ankle. The crowd gasped again. Joe forgot the children present and swore as he shook her off his leg.

Lala headed home, the Log Man drove away, the crowd dispersed, and we started clearing the road of logs. It took three hours of wheelbarrow load after wheelbarrow load, uphill. As usual, I broke all my nails, developed severe backache and totally lost my sense of humour.

Never mind, it’s only September and we have a FULL WOODSHED.