As usual, I was sitting comfortably watching TV when Snow White rang the door bell.

Her dulcet tones tinkled through to our living room. “Joe? Are you at home?”

Unfortunately, she had called at an inopportune time – a poignant moment during my favourite intellectual program, ‘The Jerry Springer Show’. A naked midget was beating her cheating husband’s head with a wheelchair.

Reluctantly I turned off the show and brought my slippered heel down on Genie’s soft belly (he’s my footstool when I watch TV) and ordered him to let her in.

“Hiya Snow,” I said, trying to sound cheerful but failing miserably. “What brings you here?”

“Hello, Joe, I was just passing…” Here the audacious wench had the impertinence to flutter her eyelashes at me. 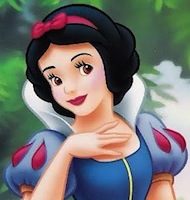 “Miss White, there’s no point fluttering your eyelashes at me. You know that I’m a one-woman man. Vicky, aka Beeky, aka The Dear One (TDO) is the only woman who may flutter her eyelashes at me. So begone with you and don’t darken my doorway again!”

It was at this moment that TDO entered the room. “What’s going on here?” she said. “Joe, who is this woman?”

“What!? I exclaimed, “You don’t recognise Snow White?” I saw that TDO was still mystified and added, by way of explanation, “And the Seven Dwarfs?”

The two ladies circled like prize fighters, sizing each other up. Eventually they agreed to shake hands.

“Tell you what, Snow,” I said, “I’m feeling generous. Why don’t you take Vicky to your house in the forest and let the little guys come stay with me. Just for one night.”

I knew that Vicky was starved of female companionship, probably Snow too, and both could do with a change. The ladies jumped at the idea. It also would allow me to have a good old ‘boys’ night in’ with her companions.

In a twinkle it was all arranged and soon I had 7 little fellas in our house. It should be noted that the brothers Grimm never named them, an oversight later rectified by, amongst others, Hollywood. At any rate here they all sat, in our house, as large and real as life.

“So fellas,” I said, in an attempt to break the ice, “what would you like to drink?”

“Tea for me, pleathe,” Bashful lisped. The others chorused their approval.

“Have any of you guys ever tasted beer?” I enquired and arched my right brow.

“Can’t thay we have,” whispered Bashful who surprisingly appeared to be their spokesperson. “What’th beer?” he asked.

“Oh for the love of a dinosaur! Are you guys for real? None of you has tasted beer??”

“I don’t care what she said! You guys ain’t leaving here without having tasted beer! It’s the nectar, nay, the amber nectar of the gods!” And with that I ordered Genie to roll out the oldest barrel from our supplies.

“Two hundred years! Oh my! If I waited that long before I had had beer, I think I would…would…die!” The very notion of waiting that long for my first beer well nigh reduced me to tears. “Genie, roll out the barrel immediately!”

Following an initial tasting session, during which all but Dopey spat out his first mouthful, we fired up the barbie. Burgers and beers were then consumed in prodigious quantities and before long another barrel was demanded. To give the little guys their due, they held their liquor well but not enough to avoid the neighbours yelling at us to keep down the noise.

Later that night we were seated around the dining-room table and I was teaching the little guys the rules of poker. I ordered Genie to supply a pot of gold and divided it amongst ourselves. “OK fellas,” I said, “now that you know the rules, let’s play!”

Thereafter the night went just as it should for a typical boys’ night in. The neighbours complained and were suitably insulted; the police were called out and were suitably assaulted; we were arrested and passed out in a cell. The next morning we were bailed out by Genie, who bribed the cops with gold, and carried us home on his magic carpet. Not much was said because we all nursed splitting headaches.

“You have been naughty, naughty boys!” trilled Snow, marching up and down in front of the little guys, who were seated on our sofa.

Needless to say that I was never allowed to see the little guys again, but it was a most memorable night, one I am unlikely to forget.