How to stop kittens climbing trees

For those who have been following the story of our three foster kittens, they are thriving… They get naughtier every day, climb our grapevine and are generally a nuisance. (Try sweeping the patio with three kittens hanging on the broom!) 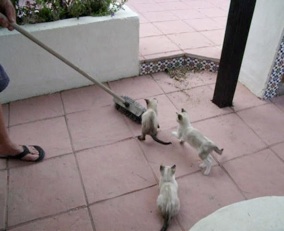 Climbing the grapevine may not seem a serious issue, but it is. The vine means access to the rooftops, and that way, into the village. The village is full of dogs, and now that it’s summer, children. Joe and I are afraid that the kittens will get lost, or picked up by children and taken away. 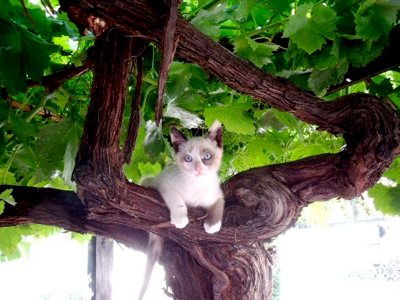 So I invented the Anti-Tree-Climbing-Device, patent pending. It’s worked so far, but we know it’s just a question of time before they get out of the garden.

The two little sisters, Milly and Mia are waiting to be flown to their new home in Germany. As for the runt of the litter, little Choccy-Paws (the kitten on the right, below), well, we’re keeping him. He’s such an affectionate, funny little character, we can’t bear to part with him. Yes, he’s staying with us!