Well, we’ve finished sorting through all the scrapbooks and photos, and my son has designed a fabulous cover…

Horizon Fever is finished and published on Amazon. Whew!

It’s now available both in Paperback and eBook editions from Amazon and all the other usual outlets. 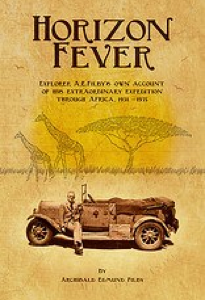 This is the blurb from the back cover:

Not only was A E Filby a famous British explorer, but he was also my Uncle Archie. He died before I was born, but his unpublished manuscript, ‘Horizon Fever’, and many scrapbooks, survived. Proclaimed “the World’s most travelled motorist”, A E Filby undertook some breathtaking expeditions, including his 37,000 mile journey from London to Cape Town and back in a series of dilapidated motorcars.

‘Horizon Fever’ is an honest, colourful, often shocking account; a snapshot of bygone days and attitudes. It tells of missionaries, pygmies, big-game hunting, gold-mining, crossing the Sahara and swimming in the Nile with crocodiles. One of Archie’s companions was a monkey called Congo. Another was a dog that adopted him, until it was killed and dragged up a tree by a leopard. Archie himself comes across as a courageous, feisty, quick-tempered, bossy little man, but full of fun, generous and never one to bear a grudge.

Thanks to Archie’s records and photographs, we have a unique glimpse of an astonishing feat of endurance, 80 years after it was completed.

Paperback and eBook available from Amazon. 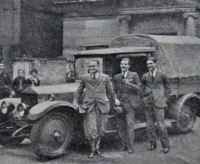