I hate having my hair done. I mean, I REALLY hate it. I hated it in England, and I still hate it in Spain.

It’s not that I’m a fussy customer – I don’t really care how my hair turns out, it’ll always grow again. No, it’s always something else, not the actual cutting-of-hair that I dislike. In England, I think it was the boredom, being a prisoner – chained to the salon chair until it’s all over.

But here in Spain it’s a little different. Allow me to share my pain with you…

I liked Tracy. She was English and recommended. Tracy cut hair expertly in her kitchen, and her huge dog pinned me down with its massive paw. Tracy was a good hairdresser – and also a good talker. Tracy could chat endlessly and didn’t seem to need to take a breath. I would nod, politely agreeing but willing her to take a breath and STOP TALKING. After a session with Tracy, my hair was cut, but my ears were used, bruised and abused. Time for a change. 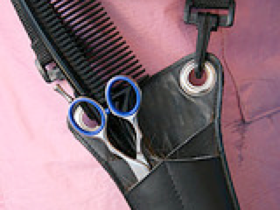 I liked Antonio. He cut hair well and was friendly and personable. The problem was that he insisted on speaking English. I didn’t understand his English and he didn’t understand my Spanish. For example, someone popped into the salon and handed Antonio a cardboard box. There was something scuttling in it. The assistants all took a peep and exclaimed. Curiosity consumed me.

‘What animal is in the box?’ I asked in my best Spanish.

Antonio’s scissors stopped snipping and his brow furrowed as he tried to understand me. I tried again.

‘What animal is in the box?’ I asked in Spanish, then English, pointing.

‘Not understand,’ said Antonio, shaking his head. I gave up.

But the communication problem was most severe at the end of each session.

‘You desire spritz?’ asked Antonio, a giant catering-size can of hairspray already poised and  aimed.

‘No, thank you, I’m allerg…’ Too late. The air turned heavy and sticky with spray.

I left the salon, as always, coughing and wheezing, nose running, eyes streaming. But not before I’d managed to take a peep into the cardboard box. Inside were two young homing pigeons. The pigeons were attractive, but the spray was just too much. 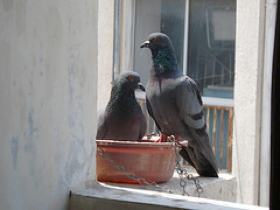 I liked Juanita. She was a skilled hairdresser and had a Lithuanian assistant called Olga.  Both wore white overalls and were masters of salesmanship.

‘Your nails are ragged. Manicure? Pedicure?’ Olga chimed in, parking her trolley firmly by my chair.

‘Your eye-brows have grey hairs in them,’ accused Juanita. ‘Olga will dye them.’

I was helpless, and as Olga transformed my eye-brows into black hairy caterpillars, Juanita sat on the front door-step, smoking.

‘There is a lot of water in the road,’ said Juanita, returning.

I paid them both and left. Joe was waiting on the other side of the street. Water flooded down the road. I hitched up my skirts and waded through to join him.

‘You should have seen it!’ said Joe, wisely not commenting on my duelling raven eye-brows. ‘The digger up there on the mountainside broke through an underground spring. Never seen so much water! Absolute torrents!’

And I missed it because of my eye-brows.

Does anyone know of a good hairdresser in the Almería area?