Which team do Joe and I support? Well, it’s a win-win situation, really. We can’t lose. The score is Barcelona 1 – Man United 0. It’s Wednesday, so there are only about twelve people in the village at the moment, but someone is letting off fireworks. Loud ones. I must concentrate on my writing.

The swallows have arrived. Summer is nearly here. There’s a cuckoo in the valley and the other birds are very vocal, building nests and bickering noisily. The carpenter bees are zooming round – huge, harmless insects, as loud as helicopters, searching for rotten wood in which to raise their families. And the best thing? No flies yet!

May in the mountains is probably my favourite month. Why? Because the mountains are covered in wildflowers; red poppies, white flowers like tiny stars, purple, yellow – a kaleidoscope of colours. All bursting with life and making use of the time before the relentless summer sun burns everything brown again.

Two village cats have adopted us. We know they are sisters because they were born in one of the nesting boxes of our chicken coop. When we noticed them, their mum took fright and carried them away to stash somewhere quieter. When the kittens grew, they arrived back in our garden. We named them Gravy and Sylvia. They decided we were a soft touch and now sit on the windowsill, peering into the kitchen, waiting to be fed. 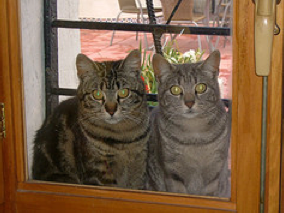 Gravy has had kittens herself now, but we don’t know where. Maybe she’ll bring them to meet us one day. Our neighbours are pretty scathing about the village cats but they have to admit; there are no rats or mice in our village.

There’s a curry simmering on the stove; we’ve got into the Spanish habit of eating late. Gravy and Sylvia enjoyed the bits of discarded fat and gristle from the meat and have melted away into the night.

Joe was wrong. Manchester United took a caning. He admitted Barcelona made Manchester look ordinary. More fireworks in the village, lots of them. VERY loud ones. Alex Ferguson is sulking.

Oh, well… Time for some curry.