We’ve lived in El Hoyo for ten years now and love nearly everything about Spain; the weather, the food, our village, our neighbours. Even so, there is one thing that is difficult to come to terms with.

The problem is feral cats. Why don’t the Spanish neuter or spay cats as a matter of course? Cats aren’t popular in the village, but even those villagers who own cats don’t have them sterilised. When kittens are born, they’re either drowned or turned out. For the survivors it’s a hard life and only the fittest, healthiest, most cunning, survive. But even these don’t seem to live very long, disappearing without trace after a few years. In England our cats lived nearly 20 years, but village cats are lucky to reach their sixth birthday.

Our village is home to dozens of cats, and at this time of year their numbers increase with new litters. Just how many cats live in the village is evident when the fish van parks in the square and toots its horn. Cats of all colours and sizes appear from nowhere, hungry for any scraps the fishmonger might care to toss their way.

Three years ago, a semi-wild cat gave birth to three kittens on our doorstep. We took the whole family in, fed them, paid for inoculation, worming, neutering and pet passports. Thanks to a local animal charity, Alstrays, we managed to have them re-homed in Germany. But we can’t keep doing that. We don’t have bottomless wallets.

“Can you hear that mewling?” I asked Joe this month.

“Yes, I think it’s coming from the logshed.”

Upon investigation, we discovered Felicity, a black and white village cat who has claimed our garden as her own, curled up in the log box. 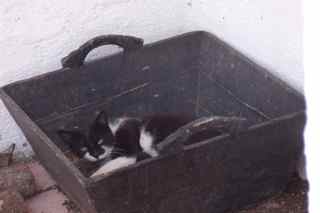 Normally she bolts whenever she sees us but this time she stayed put, her eyes huge and protective. One tiny, black kitten, looking like a fat little sausage, squirmed beside her. Thank goodness it was only one, but it’s yet another ownerless cat to add to the village population.

Felicity then decided that the log box was not a suitable nursery and moved her baby to the cupboard under our barbecue.  The kitten has now opened its eyes and Felicity is a brilliant mother. When I peep into the cupboard, Felicity’s round green eyes stare back at me warily while her baby sleeps, oblivious. 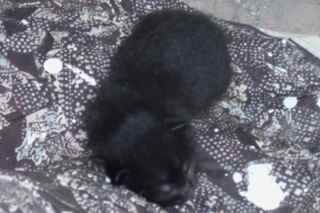 Perhaps we shouldn’t, but Joe and I do put out scraps for Felicity, and her brother Snitch, but we try not to feed them on a regular basis, fearing their dependence on us. We can’t support them permanently as we travel a lot, and plan to spend a few months in Australia this winter visiting family. The cats must learn to fend for themselves.

We’ve had a succession of cats living in our garden, all of whom we’ve enjoyed watching. Felicity’s great-grandmother stole the fish from our barbecue and her grandmother was born in our chicken coop. We’ve never seen a mouse or rat in the village, and I’d be lying if I said I’m not looking forward to seeing the little black kitten emerging from the cupboard and playing in the garden. I suspect, when it’s old enough, we’ll catch it and take it to the vet to be sterilised.

So I guess we should just accept that we share our lives with feral cats. After all, this is Spain…