Cockroaches in the kitchen

It all began last month when I got up in the middle of the night and came to the kitchen for a glass of water. I switched on the light and, to my horror, saw black shapes scuttling into the shadows. Cockroaches! I ran back to the bedroom and woke Joe.

“Joe! We’ve got cockroaches in the kitchen!” 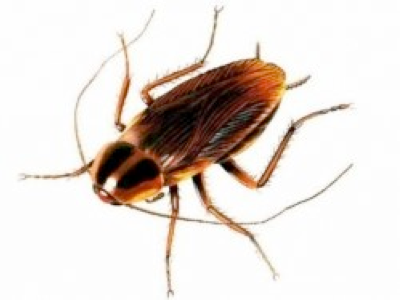 “Wah? We got wah? Right…” and he resumed his snoring.

In the morning I reminded him about our little problem and, this time, he was much more attentive.

“Well, there must have been about…six.”

“Hmm… Not exactly a plague then?”

“Don’t be facetious. I’ve just googled ‘cockroaches’. I read that if you see a few, then it’s likely there are dozens more around, hidden.”

I packed Joe off down the mountain to buy some cockroach killer. He came back with a flat contraption into which we had to place small poison-blocks. The following morning, I found two corpses on the floor. Well, it was a start.

In England, cockroaches rarely crossed my mind. I didn’t know much about these resilient creatures, but now I could probably answer questions about them on Mastermind. There are three main types of cockroach: the American, Oriental and German. Did you know that a cockroach can live for a week without its head, can run at 3 miles an hour, and can hold its breath for 40 minutes? Did you know cockroaches have 18 knees, and that their mouths work sideways? All very interesting, but it didn’t help with the extermination of the wretched things in our kitchen.

Every morning produced a few more corpses, but I knew that was just the tip of the iceberg. Again I sent poor Joe down the mountain for more cockroach killer. This time, he returned with cans of spray.

“Spray?” I asked. “Are we supposed to stay up all night in the dark, and spray them as they appear?”

“Don’t be ridiculous – read the side of the can.”

So I read the modo de empleo carefully and, that night, followed the instructions to the letter. I sprayed at floor level, all around the edges of the room, paying particular attention to the gaps beside the cooker and fridge. Success! My efforts bore fruit. Twenty carcasses awaited me the next morning. Shuddering, I swept them up, noticing that a few were still alive, lying on their backs, their legs (and all 18 knees) still twitching.

Every morning produced more corpses, but the numbers were declining very satisfactorily. After a week, I’d used three cans and disgusting black bodies no longer littered the kitchen floor. I disinfected all the kitchen cupboards (cockroaches can climb and fly) and heaved a huge sigh of relief.

I confess to having a sneaky admiration for the cucaracha. They’ve been around for millions of years, and scientists maintain they’d survive a nuclear blast. However, that doesn’t mean I welcome them into my kitchen. Believe me, if one so much as pokes its head out from behind the cooker, it’s dead.