A sneaky preview of “Two Old Fools in Spain Again”

Fingers crossed, Two Old Fools in Spain Again should be published at the end of July 2014.  It’s finished, but it’s being checked, double-checked and triple-checked at the moment.

But if you’d like a sneaky preview of Chapter 1, please read on… 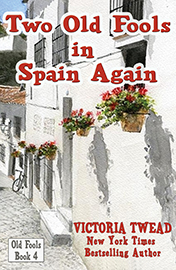 When Victoria and Joe return to their Spanish mountain village, they are still reeling from their year in the Middle East. Sighing with relief, they prepare to settle down to a peaceful life with the familiar characters of the village.

But life refuses to stand still, even in tiny El Hoyo. When a millionaire becomes a neighbour, the village turns into a battleground.

Can Victoria and Joe help restore peace to the village?

There was mould on the walls. Green and white fluffy random blotches decorated the ceiling in most of the rooms. The mirror in the bathroom had begun to rust and the beds and curtains smelled musty, as did the clothes hanging in the wardrobes. Old Spanish houses need to be lived in, need to be aired, or the damp takes over.

Our home had missed us while we were away for a year working in the Middle East. When we flung open the shutters to let the fresh mountain air flow through, I could almost hear the house sigh with relief. But living with mould and rust was far more attractive than living and working in Bahrain, a country in turmoil, rocked by the Arab revolution. Joe and I were home, back in El Hoyo, and no clumps of mould or damp mattresses could spoil our joy at being in our own house and sleeping in our own bed again.

“Bleach,” I said, more to myself than Joe. “That’s what we need, gallons of it. That’ll put a stop to the mould.”

If the house was bad, the garden was worse. Very few of my plants had survived the heat of the Spanish sun without water. The grapevine thrived, its ancient roots buried deep in the soil, but my flowerbeds and pots contained nothing but crisp, dry, brown sticks marking the places where shrubs and flowers had once bloomed.

“Don’t you worry,” I said to Regalo, the last remaining chicken. She was the only chicken to have survived, in spite of Paco’s care, while we’d been away. Now she was relishing the freedom to wander freely about our overgrown garden. She didn’t reply.

“I’ll get this garden sorted out in no time. And we’re going to get you some new sisters to keep you company. You’ll be the oldest, so you’ll be Top Hen.”

Regalo had been the youngest of the flock, pecked and bullied by the others. It was ironic that she would now have a flock of her own to rule.

Regalo looked up at me, head cocked to one side, then resumed her task of tugging out the weeds that flourished between the paving stones.

“I’m just popping round next door to see if Carmen has any bleach,” I said to Joe.

He grunted and scratched himself, deep in concentration as he flicked through the manuals, trying to figure out how to reactivate the TV, dishwasher and Internet, all of which had refused to work since our return.

A curtain of chains to keep out the flies hung across the open door of our neighbours’ house. Passersby couldn’t see in, but anyone inside had a clear view out.

I pushed the jangling metal curtain aside and entered their neat little house, already sniffing the wonderful aroma of something cooking. Bianca, dozing under the kitchen table, raised her head briefly, opened one brown eye, wagged her stump of a tail, and sank back to sleep. I remembered that she’d had eight puppies while we’d been away. It didn’t seem two minutes since she’d been a puppy herself.

Carmen wiped her chubby hands on a tea cloth and kissed me soundly on both cheeks. She looked flushed and hot.

“I have made churros and there is fresh coffee. Sit down, and I will pour you a glass.”

I was always impressed by the delicious edibles that Carmen could conjure up on her one gas-ring stove and open fire. Being summer, the fire in the kitchen was not alight, but the kitchen was still very warm from her cooking session.

Carmen looked well. She was a few years older than I, but her face was still unlined and her round cheeks were rosy with health. Although she carried too much weight, she was never clumsy, but worked quickly and efficiently in her tiny kitchen. She poured coffee into two glasses and sat down opposite me.

“You have lost weight,” she said, looking me up and down.

I nodded. Bahrain had had that effect on both Joe and I. She pushed a plate of churros across the table towards me and I selected one, still warm, dropping sugar as I bit into it. A few plates of these I’d soon be back to my old plump self.

Churros are the Spanish equivalent to doughnuts, similar in shape to the horns of the churro sheep found in Spain. They are completely lacking in any nutritional value, extremely fattening and deliciously irresistible. The villagers often served them for breakfast with milky coffee or hot chocolate.

“How are you enjoying being back in Spain?” asked Carmen.

“Oh, it’s great to be home,” I said, after a sip of coffee. “It’ll take a little while for us to sort everything out, but we don’t mind. Our boxes haven’t arrived from Bahrain yet.” We’d sent the boxes on to Spain a week before we’d left ourselves. As soon as we had the Internet working, I meant to track them and find out where they were. “Joe’s trying to get the TV and other stuff working, and I wondered if you have any bleach I could borrow? I’d like to attack the patches of mould that are all over the house.”

“Ah, yes,” she said, leaning sideways and pulling a yellow bottle from under the sink. The kitchen was so small, she didn’t need to get up from the table.

“Thank you,” I said. “Now, tell me about Sofía. Do you think this boyfriend is The One? How did they meet?”

“Yes,” she nodded, beaming. “I think he might be The One. Paco, he does not believe it, because we all know how picky Sofía is. But me, I think Alejandro is The One.” She paused, lost in thought, probably dreaming of future grandchildren.

“And how did they meet?”

“Sofía’s boyfriend is a millionaire’s son?” I asked, surprised.

“Yes, but he is also a solicitor. The family have machinery shops, a chain of them across Spain. Young Alejandro looks after the legal side of things. They have many houses, one in the city, and some in the country. They have a house in El Hoyo.”

“You know the house with high walls, below the square? The one with big gates?”

I knew the one. Most of the houses in the village were ancient cottages, like ours, but there were a few grand ones hidden behind walls, occupied only for a few brief weeks in summer. As one walked past, guard dogs barked a warning. I’d always thought it was unoccupied.

“They don’t use the house much,” said Carmen, reading my thoughts. “But they have workmen who feed the dogs and animals.”

“Yes, they breed rabbits for the pot, and chickens. And the gardener grows vegetables. Now that young Alejandro and Sofía are together, we have a very good supply of rabbit, chicken, and eggs.”

“Sounds like Sofía has found an ideal husband!” I observed.

“You will meet Alejandro and his parents,” she said. “They spend more time in El Hoyo now.”

“And what about the Ufartes?” I asked. “Maribel is having another baby?”

Carmen nodded, then pursed her lips and lowered her voice.

“Yes, she is… Between you and me, I do not think everything is going well with that family.”

“Really? Why not? They were dancing in the street last night. And the twins seemed fine.”

“Mark my words, I can see problems.” She leaned forward and beckoned me closer, as though eavesdroppers might hear. I could feel her hot breath on my face. “Lola is back!” she hissed.