I’ve been looking back on 2016, and it’s been a real rollercoaster of a year. Joe arrived in Australia on January 1st so the year began well. House renovations began.

Then baby Winter, my new granddaughter, arrived in April.   And what a joy she is! Full of smiles and naughtiness, she is an absolute delight and her big sister Indy adores her. 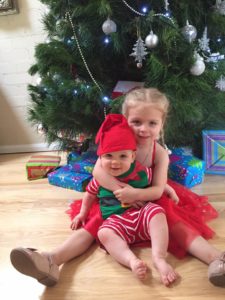 B is for Bella, the second of the Sixpenny Cross series, was published in July. Then Joe’s book, One Young Fool in South Africa, followed in September.

It was almost as though Joe used the last of his energy to complete his book. At the end of September he developed a severe chest infection and was rushed into Intensive Care. Three times he was put on a life support machine, and we all thought the end had come.

Joe surprised everybody, except himself, by beating the infection and battling until he was released from hospital. It was a frightening time, but Joe is home now and coping brilliantly.

Through all this, house renovations continued. As I type, we still have no kitchen. I don’t really care because it’s midsummer and we have a barbecue, and Lola the Spoodle and I are just grateful that Joe has recovered.

I’m ready for a new kitchen and also a fresh new year. At least the events of 2016, both good and bad, have given me plenty of material for the next Old Fools’ book, Two Old Fools in Turmoil…

Join me on Facebook to see how we’re coping, day to day.
Friend requests welcome!