It’s either Uncle Felix’s mule or Geronimo’s donkey that wakes us up. The donkey has a girlfriend in the next village and he insists on serenading her at daybreak. The cockerels then join in, first one, then all of them, each trying to out-crow the other.


It’s summer and the heat is astonishing although perhaps not surprising as we live on the fringe of Europe’s only desert. The sun has bleached all the green out of the mountains and the carpets of wildflowers have long since withered away until next spring.

I grab the blue plastic ‘treats’ box and make my way to the chicken coop. The girls jostle each other, craning their necks to see what’s for breakfast. Today it’s a Pasta Surprise, leftovers from our dinner last night. The ‘surprise’ is the garnish of dead flies, casualties of the fly-swat Joe wields so expertly, an essential tool this time of the year. Attila the Hen is showing her age and allows the others to barge past and grab the best bits. I check the feeder; more grain is needed so I open a new sack.

‘Joe? Joe! There are little walky things in the chicken grain!’

Joe joins me. ‘Walky things? What are you talking about?’ He peers into the writhing sack. ‘Oh! I see what you mean…’ 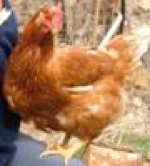 We discuss the insect infestation and decide they’ll probably just add protein to the girls’ diet. Joe fills the feeder, and the girls happily tuck in. We return to the cool of the house, Joe to make coffee while I try to identify the critters on the internet, a slow business – no broadband here.

Suddenly, we both hear a strange noise coming from the garden. A flapping, scrabbling, metallic noise. Joe steps out to see what’s caused it.

‘Hello…’ he says, using the voice he reserves for small children. ‘Where did you come from?’

My curiosity gets the better of me. I go out to join him.

There, looking up at us, and not in the least flustered, is a chicken. A rather ugly chicken, if I’m perfectly honest. She is very dark brown and tattered with ragged tail and feathers that stick out at all angles. She’s very young as her comb is barely visible. Her beak is short and blunt where it’s been singed off over-zealously by somebody. (Singeing chicks’ beaks is a nasty practice still carried out by some who believe it will stop chickens pecking at their own eggs.)

But perhaps the most remarkable thing about this chicken is her boldness. She takes several steps forward and quizzically looks up at us with her head on one side.

Chickens can fly quite well, but reluctantly. They only take to the air as a last resort if chased, panicked or excited, like at feeding time. They never fly high.

Therefore we conclude that she did not soar over our twelve-foot wall; she must have been thrown. The noise we heard was her flapping and her claws trying to grasp the metal staircase that runs up the inside of the wall. Anyway, she landed unharmed and was apparently unfazed by the experience.

Joe opens the garden gate and looks up and down the street. Nobody there.

‘I’ll get her something to eat and drink,’ I say, ‘while we decide what to do with her.’

To my astonishment, the chicken follows me into the kitchen. Usually, the chickens head straight for our flower beds, intent on horticultural demolition. But this chicken stays glued to my heels like an obedient sheepdog. I test her by changing direction. Wherever I go, she’s one chicken step behind.

‘Well, you’re a strange chicken,’ I tell her. ‘We’ll call you Regalo because you were a present, a gift.’

We only have one chicken coop so there’s no other option; we’re forced to put her in with the others. The flock is clearly unimpressed with the new kid in the flock. Attila the Hen leads a ferocious attack that sends poor Regalo scuttling up ramps to a higher level.

We’re forced to leave the battle as our cupboards are bare and we need to go shopping in the next town. Our village is tiny, so small that many Spanish locals haven’t heard of it. Most of the year there are only eight permanent residents, but at weekends and in August the numbers swell to a couple of hundred. Today is a Wednesday in June and as we drive out of the deserted village, we pass Marcia’s house. Marcia, Geronimo and Old Sancho are sitting outside in the street. Geronimo’s three dogs are slumped at his feet like piles of old carpet. Joe slows down.

‘Somebody threw a chicken over our garden wall this morning,’ I say.

‘Yes, we are, but do you know who it belongs to? The chicken, I mean,’ I persist.

Marcia shakes her head and the inevitable hairpins fly out. ‘I saw a chicken walking past this morning,’ she says, helpfully. ‘Wait, I will ask Sancho.’ She turns to her husband.

‘Sancho, the English say today somebody threw a chicken over their wall.’

Old Sancho listens carefully, a grave expression on his ancient face. He ponders, forehead screwed in concentration. Then he smiles and speaks. Marcia leans to catch his reply, her ear close to his lips, then straightens.

‘He says today he saw a chicken walking up the street,’ she announces.

Geronimo then looks up and thoughtfully sets his beer bottle down on the bench.

‘Was it a brown one?’ he asks. ‘I saw a brown chicken today. It was going in that direction.’ He waves his omnipresent Real Madrid scarf in the general direction of our house.

Clearly we are getting nowhere. Everyone has noticed Regalo walking the village streets, seemingly an everyday occurrence, but nobody seems to have lost her. And nobody saw who threw her over our wall. We thank them all for their help and drive away.

The winding road through the mountain is deserted. Flocks of kaleidoscopic bee-eaters chatter on the power cables and swallows wheel overhead.

At the supermarket, we notice a house martin nest above the door. Two fledgelings are teetering nervously on the edge while their parents tweet encouragement and swoop anxiously nearby.

We complete our shopping, and Carmen, the sales assistant, hands us a free parasol, a promotional gift.

‘Gracias,’ says Joe, ‘but we already have three. You gave us a parasol last week, and the week before.’

Carmen looks offended so Joe accepts it anyway and surreptitiously gives it to another customer on the way out. We look up at the nest; it’s now empty. It seems the baby birds have successfully made their maiden flight.

Back in our village, there is no sign of life and the heat is ferocious. Marcia and Old Sancho are probably enjoying a siesta and Geronimo is most likely cooling off with another beer, dreaming about his beloved Real Madrid.

I can’t wait to see how Regalo is faring. Not very well, as it turns out. Attila the Hen is determined not to allow her down from the top level. Whenever Regalo ventures back down the ramps, Attila and her henchhens launch at her, sending her in a flurry back to the top mezzanine.

There’s nothing we can do, so we unpack the shopping, have a late lunch and feel grateful for the metre-thick walls of our house that keep us relatively cool in summer. It’s too hot to do any jobs, too hot to write, too hot to think. Even Geronimo’s mule has stopped singing to his lady-love.

‘The beach?’ says Joe, and I nod, already packing the towels.

The drive down the mountain is worth it because the swim in the cool, sapphire sea is ample reward. We avoid the jellyfish that float like little discarded plastic bags near the surface. The afternoon passes, and by the time we return to the village, the sun is disappearing behind the mountain.

I check on the chickens. Attilla and the rest are already perched on their roost, squabbling like schoolgirls. Poor Regalo is hunched, snoring gently, alone on the mezzanine, an outcast. I know it’ll take a while for the others to accept her but eventually they will.  We’ve seen it all before.

That evening, Joe and I eat on the roof terrace and sip wine under the vast black sky. There are more stars than are possible to count, and the occasional meteor flashes by like a stray firework. A scops owl calls to another across the valley.

Joe nods. Geronimo’s donkey sings one last mournful song to his beloved in the next village. The end of another day.

Free entry to monthly draw for a signed copy of ‘Chickens’.