A bit of an emergency Part 2

If you’ve read Part 1, you’ll already know how we ended up with 3 kittens and their beautiful Mum. We’ve never cared for newborn kittens before, so it’s all been a bit of a learning curve. 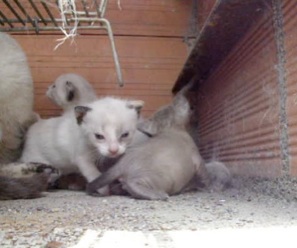 To be honest, MumCat does all the hard work. Never have 3 kittens been so soundly washed, fed and protected. Yes, she’s doing a superb job. We moved the whole family from the cemetery into our woodshed to keep them safe, but one morning I had a shock.

‘They’ve gone!’ I gasped. The woodshed was empty; no MumCat, no kittens.

Joe and I searched the garden. No cats. Then we heard a tiny mew coming from the barbecue. During the night, MumCat had carried each one and stashed it behind the metal coal box. Not a very sensible place as the barbecue is several feet high and the kittens were beginning to crawl.

We sighed and kept watch. Sure enough, later that day, one tiny kitten ventured too far and tumbled down onto the paving slabs below. Its terrified squeak attracted MumCat, who picked it up by the scruff of its neck and attempted to jump back up again.

‘This just won’t do,’ I told MumCat. ‘Behind the barbecue is a daft place for your babies. They’ll keep falling out.’

So MumCat and I compromised. I  jammed the cupboard door below the barbecue ajar, and spread some bedding in there. Then I lifted each kitten and put it in the cupboard. MumCat followed them, and everybody was content. Joe and I sighed with relief.