I have a confession. I’ve been keeping a very big secret. The reason for my silence was just that I couldn’t bear it if something went wrong. But, thank heavens, nothing did.

Mind you, I’m surprised people didn’t find out. My granddaughter, Indy, is three years old and doesn’t really understand the concept of secrets. When her parents told her she was going to be a big sister, she announced it to the world.

“My mummy has a baby in her tummy and her name’s Dragon.” 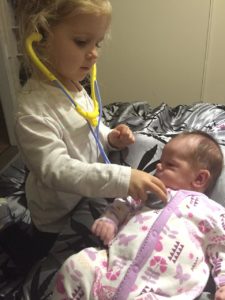 She told the waiter, every shop assistant, the staff at the daycare centre, and the girls at the gym creche. She told the couple at the next table in the cafe, the street cleaner and the man who read the meter. She even told the wallabies in the park.

“Hey, wobblies! Guys! My mummy has a baby in her tummy and her name’s Dragon.”

The wallabies stared at her for a moment, then hopped away.

At the beach, anybody who would listen was told, and even the sea gulls were informed.

“Hey, sea girls! Guys! My mummy has a baby in her tummy and her name’s Dragon.”

Apart from my daughter’s gestational diabetes, nothing went wrong and a day after Australia Day, she went into labour. Soon after, Indy’s baby sister was born with a head of hair as dark as Indy’s is blonde.

How wonderful it is to be here in Australia and see this baby from the first day of her life! Leaving Spain was hard, but this new little person has absolutely confirmed that we made the right decision. There simply is nothing better than being close to family.

Oh, and just to clear a little matter up… The baby’s name was never going to be Dragon and nobody had ever suggested such a name. One can only guess where three year olds get their ideas from. No, after much discussion, the baby was named Winter, to celebrate the fact that her parents met in the snow.